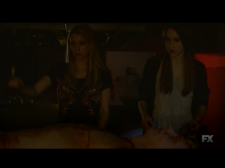 When a show opens up with a supposedly dead woman siccing a supposedly dead gator on two poachers, I am hooked. The reemergence of Misty was an early taste of the resurrection theme the show is following. Watching the blood splatter as the man’s head crushed in the gators jaw, if there was any doubt I was watching American Horror story, it was quickly brushed away.

After that big crash Madison caused in last week’s episode, the new besties headed off to the morgue with Madison looking to repay Zoe for killing that horrible boy. Her plan was to resurrect Kyle, but the crash left him in pieces. Being the crafty and disturbed girl Madison is, the plan became to create Frankenboyfriend. “Do you think he was a grower or a shower?” spilled from Madison’s mouth as she surveyed the available parts.

Did I mention that Kyle is Frankenboyfriend? When he finally resurrects, he goes hulk smash on the guy checking on the morgue. Even as Zoe drives the mindless Kyle away from the hospital, he is still having his little fits and

lolling his head. Thankfully, Misty comes to the rescue and patches Kyle up with some dung mix that will help with his stitched together parts. I’m interested in seeing if Kyle will remain a mindless thing or if Misty has the ability to help restore Kyle’s mind for Zoe. if Misty can’t, I imagine there will be  a lot of anguish for Zoe as she questions why she took part in such a horrific spell.

The tension between LaLaurie and Laveau is tangible and enthralling. Laveau didn’t give LaLaurie a love potion last week. It was in fact an immortality potion that would force LaLaurie to be trapped beneath the bricks of her own home for over 200 years. Fiona’s conversation with LaLaurie proves that even Fiona finds LaLaurie’s actions disgusting. Yet, Fiona isn’t going to just give LaLaurie up quite yet because she is the embodiment of what Fiona wants for herself.

The moral high ground of Cordelia is almost irritating, which is bold to say so early in the season. However, the struggle with her inability to conceive a child is almost ironic considering the theme of resurrection. With all the death and renewed life, it is unfortunate that she can’t create a fresh life for the world without in previous attachments. Her refusal to use magic for her own gain is both admirable and foolish at the same time. Which made watching her give in and use the spell almost unfortunate. She wants a child, a family so bad she is willing to sacrifice her morals for what she believes will lead to happiness.

The appearance of Marie Laveau in modern times was quite fitting. She has a bold personality strong enough to go up against Fiona. With her appearance it became clear that Marie is not a witch like Fiona and the girls. But a voodoo priestess. It seems that Marie’s lover turned minotaur has also survived into the present, but is still donning an animal head. I am desperate to see more of her character and considering the threat Fiona made to Marie, I’m sure my desire will be satisfied.

American Horror Story is always good with character development. I enjoyed learning about what brought Queenie to the school. Her human voodoo doll ability is fascinating and can be very useful, if it is tapped into.