Arrow goes against gang bangers. Can I start by saying I hate stereotypes and I hate gangs. Thus anything to bring down The Mayor, or so the leader of the gang goes by, was a welcome stopping goal. Really the Mayor was one of the flattest villains that have appeared on the show thus far. When Black Canary finally dispatched him, I didn’t really feel sorry to see him go. His return at the end of the episode was rather lame. It was even more disappointing that we had all of that build up just to see him die at the hands of Brother Blood.

About that. Brother Blood! is on the scene in the lovely package of Kevin Alejandro. It is great, but we all know it was coming already.

Felicity is a smart girl for realizing that Black Canary wasn’t following Oliver but Laurel. Considering Black Canary is Laurel’s sister, it makes sense that she’d want to make sure that her sister is alright. I’m glad they didn’t play out and tease who Black Canary actually is and the fact that she has a very personal relationship to Oliver. The reveal that she is Sarah Lance, the girl Oliver thought died in on the boat and the girl he betrayed Laurel with. 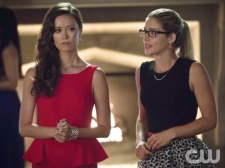 Sarah’s new emergence is prime to fill Oliver with some anguish. The girl he essentially ran away with is back and keeping secrets. Despite her re-emergence, she doesn’t want her family to know about her presence. In fact, when she meets up with Oliver, she quickly hides when her father arrives to speak to Oliver. This has a lot of potential to get Oliver’s identity exposed to all of the Lances. It also presents the opportunity for Oliver to get into some major trouble with the Lances if they discover he is keeping secrets about Sarah.

The story this week was a little bit lacking, but it really was a way to set up Black Canary. She will be a character that has an intricate story and we already know a bit about her life. This episode gave us a look into her character at present. But everything tied up with R’as Al Ghul is still waiting to be revealed. Her character gives the show even more promise.