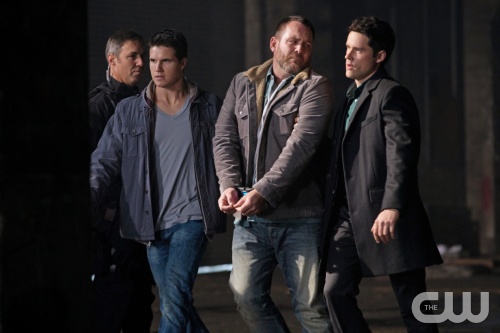 Stephen and his partner bring in Errol

After everything that has happened it is kind of a relief to know that Stephen’s father actually is alive. It isn’t all for nothing, but he isn’t jumping back to the real world just yet. He’ll need a body and according to Jed, it’s been cremated.

The Tomorrow People and Errol

Errol a breakout from the Citadel has unbelievable power, not to mention an affinity for using severed hands to escape. More importantly, Errol was a strong telepath capable of a push. The telepathic push was capable of keeping other Tomorrow People out of his mind, while also disorienting the infiltrator.

Cara as a leader is not so great. She has a very different mode of operation than John, which isn’t the bad part. It is Cara’s inability to see and acknowledge other sides of subjects. Cara has very strong views and anything that gets in the way of what she thinks is best. She is cold as a leader, but she does manage to accomplish what she sets out to do. Cara may have wanted to help the people get out, but the Citadel is far too fortified. Cara has become a very different person, though the seeds of her rage were previously planted. Cara seems to lack an ability to interact and empathsize with people. After Cara’s confrontation with Jed, she’s ready to bring Morgan to Ultra to spite Jed. 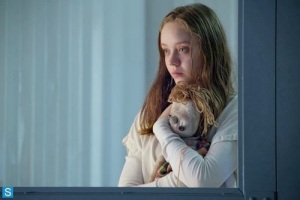 Charlotte in the Citadel

The attack on the Citadel led by the Tomorrow People was a massive failure for the Tomorrow People and for Cara. The Citadel was a highly fortified sister location of Ultra. It is unsuprising that the location would have been extremely high tech and very protected. The idea that Cara could lead a small team of the Tomorrow People into the Citadel was foolish. It had been noted before that no one had previously broken out of the Citadel and absolutely no one had broken in. It was a foolish attack plan on Cara’s part or maybe he naivete of how intense Ultra really is. John was able to keep them alive because he know how Ultra operated from the inside, that isn’t so with Cara.

Stephen took a bullet for Ultra. While it was to help Errol, it was finally a way to convince the others that Stephen is playing for Ultra and not a double agent. But it wasn’t enough to truly convince Jed, only enough to get him off his back. Something is better than nothing and considering it almost entirely backfired.

This episode featured Stephen’s family a decent amount and I hate to say that I wished all the scenes with the family were cut. They aren’t nearly engaging as the other characters and that’s saying something because there are only three truly interesting characters on the show. And none of them live in Stephen’s house.

The major problem of this show still remains that they talk too much. Every decision they make on the show needs to be talked through and explained. Every time. It has grown to be one of the most annoying traits of the show. Unless the Tomorrow People can find a way to move past this issue I doubt the show will be removed. That said, there have been major improvements since the first half of the show already. Where normally, they would have spent half of the episode talking about what they were going to do, this episode we only spent maybe a third of the episode doing so. It’s better, but still needs work. The show needs to figure out how to weave information into the action so not to stop the momentum of the show.