One has to keep in mind that we are only 6 days into this journey. Things may not seem to be going very quickly because we’ve had weeks of time to process this, while the characters have only had a fraction of that. 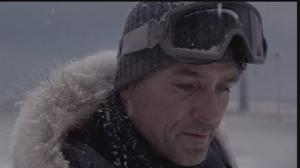 Right at the beginning we were reminded that Ballaseros was bloodied and stripped of his heavy jacket. We would have been far luckier if Ballaseros was actually dead, but he’s not. Instead he’s being locked up by Anana. She’s a great character he doesn’t play any games. She’s the only police in the area and she seems to be after information from the facility. When Ballaseros manages to escape he notices Daniel outside her place and takes a knife to kill him. For a moment, he could have had him, until Anana pulled a gun. The most interesting thing to come out of this encounter that shouldn’t have happened was learning that Daniel is her sister. Oh and he goes by Toluk.

There is some sort of redemption for Sarah as she admitted to what she had done. Sure, Alan was angry about not being informed, but he was more stirred into action than anything. He’s determined to get Julia out of Level R. Sarah meanwhile just wants to do her job and prove herself. As they work together they find out what the virus was meant to do. The virus was designed to introduce a cure into people. It was a delivery system for gene therapy meant to cure all forms and stages of cancer.

Alan is a rather one sighted man. he has a goal and he will do everything in his power to get there. Getting down to Level R isn’t that simple with all the entryways sealed of and Daniel controlling the elevator. That means he and Sarah need to break into the the level. Unfortunately, Level R is a horror show, literally. Vectors are charging at people frenetically and seem to not care about anything. Going down there is a major risk of safety. It was fitting that Sarah first recognized the vectors as monsters as Alan still clung to the idea that they are patients. They abandon trying to get down to Level R and resort to doing lab work instead. Which is what they should have been doing considering they know Julia was undeniably sick. 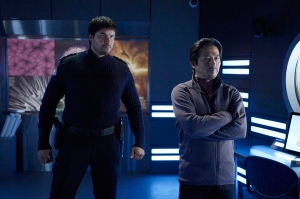 Unintentionally, they found that the cold slowed the virus. In a drastic attempt they sought out a doctor experimenting with cryogenics. He was a bit nutty, but he managed to get Peter successfully suspended in the cryogenic fluid to lower his body temperature. It was a big show of confidence in a man Farragut didn’t know, but Alan is now a man who is desperately trying to hold on to the people he cares about. Losing Peter would break him.

As for Julia, it’s really great seeing her point of view. While the others are dealing with the virus and it’s implications to the safety of the base, it isn’t the same for Julia. Getting a look into her devolution is one of the most interesting aspects of the show right now. First we saw the black blood, then we learned that Jaye was no more than a hallucination. Everything she thought Jaye did, was actually her. Now that she is seeing the young girl that’s presumably her it’s also interesting. The make up effects on Julia are phenomenal as the veins are accentuated and her eyes have an eerie bloodshot. Her reaction to her appearance might have been even better than the effects. Julia’s trips into her mind and confrontations with her memories and fears was a nice touch of how far gone she’s getting.

The wound Hatake inflicted on himself heals at a remarkable rate. I wouldn’t be that surprised if they revealed that Hatake was one of the successful participants in the experiment for he cure that could cure all diseases. Either way, there is something unique about Hatake. He’s splitting his time between Level R and those above. Now that he’s above, he’s still hiding secrets from Alan and also laying the smackdown on Daniel for attacking Ballaseros. There is a reason Hatake is the boss as he recognizes the repercussions of removing Ballaseros’ presence.