Any story that is consumed has characters. Every story, even the real life ones. And with every story the characters need to be developed in order to feel for the character. In some situations the characters circumstances can cause automatic sympathy or antipathy just based on a few key words. That is how we as a society work anyway. We judge quickly based on a few facts. Everyone does it, so don’t pretend you don’t. It is the good people who don’t let the initial judgement flavor the way we react to people and characters and instead let the character actually prove themselves. As a result, characters are then cemented as one thing that we perceive and must either live up to that expectation or subvert it. Some of the best ways to see these come to pass are in the fun moments that are a bit removed from the plot.

Troy and Abed in the Morning

Fun Moments
Many of you may be asking what I’m referring to when I’m talking about fun moments. When I think of fun moments, I’m thinking of entirely character development moments where the plot isn’t central. For example sometimes on comedy shows, you see these purely character scenes as cold opens or tags. They allow you to see characters doing something that is entirely natural to them. For example, in Community, there were previously a number of episodes with tags about Troy and Abed’s imaginary talk show: Troy and Abed in the Morning. The result were some great hilarious character moments. None of these moments ever advanced the plot, but we got to learn more about the characters and connect with them better.

Character Development
So when we talk about character development in these specific “fun” moments we are there to learn more about who this person is. Sometimes these can just be conversations that serve to make the character more whole. Sometimes they make a character express various doubts. The most interesting thing about what these moments can do is that you can gain a connection to the character without having to judge them against the plot. Thus a show or a book, or any medium really, that uses these fun moments to connect to the characters, the audience can be more forgiving. Whereas if a character is only developed in the range of the plot, you may not understand the whole character who may be acting a certain way because of the specific situation they are in. 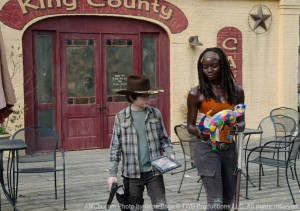 Balance
Most people don’t sign up for a story just for the characters. At least not at first. People flock to new stories generally because something is compelling them. It can be the characters, it can be the plot. However, once something is established, it will largely be the characters that get someone to return. If the plot is the main thing people are coming for, then the characters can be interchangeable. That really isn’t the goal when it comes to developing a character. The idea is that you want a character that will inspire and entice people to come back to see more of the characters journey. The main way that can be done is finding a balance between having an engaging plot and developing characters to be interesting people regardless of the situation they are in.

How do you hand character moments?