We started the episode with a major jump into the future. Day 235 to be exact. From all appearances Alan was taking to torture in his continued attempts to bring down Ilaria. Apparently all the outlets that Alan attempted to contact about Ilaria have turned a blind eye.

Hiroshi is taking Daniel’s death really hard. Hiroshi loved Daniel with all his heart, but they both knew that it wasn’t quite as strong as DNA. Julia is his daughter against all odds as an immortal. Through this we learned that Julia doesn’t hate Hatake. More importantly we now know that the Narvik was created in an attempt to save Julia’s mother. 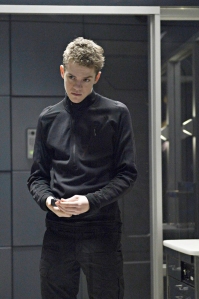 Anana is still hopelessly devoted to Ballaseros. Her sudden love for him really doesn’t make much sense. They’ve spent at most a few days together and he hasn’t exactly always been trust worthy. Toluk is still not so hot on the plan, but he isn’t going to leave his sister alone.

The confrontation with Scythe was great. In this instance we saw a major contrast between Alan’s earlier scene. While Peter was immediately ready to torture him, Alan had a different opinion. For Spencer, this is all just a game for him to watch play out and gauge their reactions. Alone with Spencer for a bit, he is tempted to hurt Spencer as he is taunted time and time again.

Narvik has expanded outside of the confines of the arctic. The virus is now causing its damage in Puerto Rico infecting what is presumably thousands. Alan is quick to assume, and with good reason that Ballaseros was responsible for getting Narvik to Ilaria. We know for a fact that Ballaseros is actually prowling around in not so great condition in the snowy tundra.

Ballaseros is brought in by Blake, who by no surprise already knows Ballaseros. She wants him to work with her and take down Alan and his people. Unfortunately for her, Ballaseros doesn’t see it that way. The team doesn’t quite believe Ballaseros innocence in the outbreak, but he insists that he’s not working for Ilaria any more. All Ballaseros wants is the list of inuit children who were taken.

Sarah still isn’t feeling in tip top shape. One of the doctors offers to run some tests on Sarah to make sure that she’s alright. Turns out he’s a hematologist and recognized the signs of cancer in her blood. I’m starting to now wonder if Sarah is suffering from a sort of Deadpool syndrome with her immortality. While she may live forver, she may always be battling cancer for as long as she lives feeling the symptoms of impending death, but never actually reaching death. There was also news that Sarah is in fact pregnant. Now that she’s and immortal I wonder what that means.

Possibly the biggest betrayal of the series was the reveal that Peter had been working with Ilaria all along. He was the one who actually smuggled Narvik A off the base for it to be released. Hell, Peter nearly sacrificed his life in his attempts to help Illaria. Unfortunately, it’s had to understand why he would do this work for Ilaria for years. The words Spencer spoke about him being second best to Alan may provide part of the motivation, but don’t explain why he would do such a thing. His work betrayed the woman he swore he loved.

This episode, similar to the first episode really packed in some powerful moments. Julia’s reunion with her mother was great as her mother came to her senses. Even better was Hiroshi’s moment with Jane. There is no doubt in my mind that Hiroshi loved Jane with all his heart as she shared a moment with the woman he loved. Not to be counted out of the emotional moments, Anana nearly broke down at the news that Daniel died. Thankfully, we didn’t have to witness all of it as they quickly moved on to Peter’s lies (not they they knew they were lies).

Talk about an ending. The Arctic Biosystems explodes as everyone is escaping, thankfully preventing the deaths of most. Spencer catches Julia under threat of killing her, but instead kills Jane. Hiroshi in distress collapses beside his dead love distraught. Spencer flees with Julia. Alan isn’t having that and throws his mother’s severed head into the chopper with Spencer sparing just enough time for him to jump in. Upon realizing that Julia is chained down, she gives him Narvik and shoves him out of the helicopter. All of this leading to Alan’s desperate pursuit of Julia who seems to be settling in just fine with the 500. Man, why couldn’t every episode this season feel this satisfying?

Oh and in case you didn’t know, Helix has been officially renewed for season 2 as of today.