the episode started out with Garrett being attacked mid-flight by someone. It was a bit of a shocker to him that SHIELD was the one shooting at him. With a bit of help from Coulson they manage to blast the attacker out of the sky and get Garrett on board. 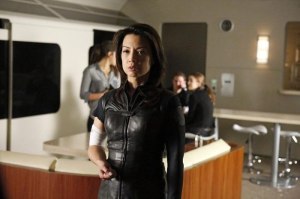 May was communicating directly to Nick Fury under orders. With the situation tense, May is knocked out and brought into a room with Ward. She is potentially a danger and they can’t be sure she’s telling the truth.

Fitz is frustrated by the whole situation. He was securing a direct line to help Simmons communicate with god knows who. Fitz is in over his head and is paranoid by what is going on.

When Simmons is finally alone, she hides her research from Agent Triplett. The flirtation between the two of them is dwindling. Triplett accuses Simmons of not helping a SHIELD agent that was dying when she possibly had the means. We learned that Simmons is a level 5, which means Triplett is willing to help her contact someone at the SHIELD Academy with his level 6 clearance. He calls her out for not being a good liar and she proudly seems to say that she’s getting better.

With Garrett on board, Coulson makes it clear that he things Agent Hand is in fact the Clairvoyant. As they discuss, Skye was deciphering the transmission that hand was going on about. The message finished decrypting revealing the words that people who already saw Captain America: The Winter Soldier already knew about, HYDRA. And all of this happened before the first commercial break.

Coulson and Garrett realize rather quickly that with HYDRA back in play they are in serious danger. Garrett is ready to cut and run, until they remembered that Simmons and Triplett are still on the ground. Simmons manages to make her connection, but SHIELD agents were already being rounded up, and Simmons was warned to hide. For a moment, they tried to paint Triplett as the villain as he locked the door, but he gave Simmons his knife. At this point, either one of them could have been dangerous to the other.

Ward is feeling rather betrayed by May’s actions. They are being rather harsh to her, when they knew from the beginning the kind of warrior that May is. May has always been the Cavalry and she’s very harsh, but gets the job done every time. Coulson is willing to take the risk on may and restablishes her direct line. However, when she calls, someone else answers and informs her that Nick Fury is now dead. It’s clear that these events have now happened at some point after the point when Nick Fury staged his death.

With Fury dead, May gave up the goods that Coulson was begging to know. May was recruited to watch over Coulson under Nick Fury’s order. She was to create a team of people, one who could repair his body (Simmons), one who could reprogram his mind if necessary (Fitz), and a specialist to take him out if neessary (Ward). Fury then passed on the parameters to Coulson who formed the team. May desperately wants Coulson to believe her because she did it all for him. Coulson is having a hard time accepting this though.

Turns out the drilling tool we saw in The Winter Soldier, and again in this episode, was created by Fitz. It also came in handy as they were running from the team. They are on the run as a strike team goes in to take them out without destroying the plane.

At the Hub, Simmons and Triplett were found hiding in the room. Agent Hand was quickly brought in after for a little talk. Hand went on a spiel about how if they didn’t swear allegiance to HYDRA that very moment, then they would be killed. Apparently many people failed her test, but not Triplett who attacked one of the men who had guns on them. It was then revealed that Hand was not HYDRA and was trying to weed out who was and wasn’t. But she did tell them at Coulson was in fact HYDRA. It’s interesting that Coulson believes Hand is the Clairvoyant, while Hand thinks he’s HYDRA.

As they discussed that Hand needed to be stopped, Garrett declared that she needed to be killed. As he went on his tirade about why she needed to be killed he let out a bit more information than was actually available. That was a dead give away for Coulson that it was in fact Garrett who was the Clairvoyant and HYDRA. With him being HYDRA and the arrival of SHIELD soldiers, he revealed that Sitwell helped fill the ranks. Non-HYDRA soldiers were killed and the team was at the mercy of HYDRA. Garrett admitted that he was the man responsible for giving the orders to torture Coulson. Garrett even made Fitz cry as he threatened to use Fitz within HYDRA whether he agreed to it or not. 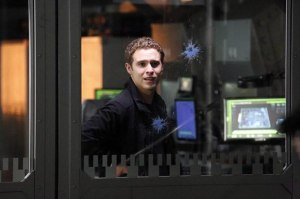 At just that moment, Skye’s bomb went off giving the team a chance to strike. Fitz even killed a man to save May. Triplett was furious to learn that it was Garrett working against him. Triplett felt betrayed on the deepest level. Lied to more than any other. His reaction was fantastic. Ward however, is upset, but not nearly as distraught.

By the end of the episode, it was made clear that COulson and Hand were the highest ranking officers that weren’t HYDRA or dead. Coulson  no longer recognizes May as a friend, but she’s still an ally. In an even darker turn. Ward kills Hand and frees Garrett before he can be taken to the icebox. Well damn. While I wouldn’t have expected Ward to be the betrayer, he is the man with the darkest past and the least connections to anyone else on the team on further thought. In fact, it makes the most sense out of them all and I’m hitting myself for not seeing it sooner. I’m unsure if Ward is HYDRA proper, or if he is just extremely loyal to Garrett.

This does leave a bit of an opening for Agent Triplett to join the team, which would be  a welcome addition. I quite enjoy Agent Triplett and a bit more diversity on the team can’t hurt. Not to mention in the short amount of time Agent Triplett has been on the show, I’ve found him a more engaging and layered character so far.