Maria was frustrated about all the people trying to get intel from her and all the various government agencies tailing her. However, her tails were quickly incapacitated when May arrives. May wanted to confirm if Pearce was the one behind Coulson’s tryst with T.A.H.I.T.I., but Maria wasn’t giving any answers. She also wasn’t going to let May in on the fact that Fury was still alive. May didn’t believe it, but left the discussion for another time.

Coulson and the remaining team are dealing with the disappearance of May followed by Ward and Skye leaving in the bus. Tripp is very suspicious about it all and lets Coulson know that . Apparently sky left behind some nice little clues for the team. When Fitz and Simmons go fetch something, Simmons finds Koenig’s body and Fitz finds the message about Ward being HYDRA.

Alone with Ward, Skye is really tense. She tries to explain and not give up her cover, but Ward isn’t entirely foolish. He disarms her under the guise that her having it would risk her getting arrested. She’s navigating them to a public diner for the decode which she hopes will keep her safe. Ward is suspicious, but is also playing his game still. It’s nice seeing them both play their ruses with each other.

Back at Providence, Simmons is making the autopsy. All the while, Fitz was freaking out that Ward was HYDRA. He isn’t able to handle that Ward had betrayed them all. He explodes and beats things up at Simmons confirmation that Ward killed Koenig. He’s disraught, but he’s going to do his work. Any words of kindness from Tripp were too much for him to handle despite Simmons figuring it out. Coulson keeps a cool head and immediately goes after trying to pinpoint their location. In fact, Tripp was the only rational person he could talk to. He figured out that Skye was in LA and that Ward wanted the info from the hard drive. Coulson has faith that Skye can stall. 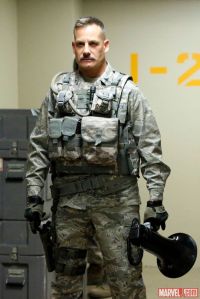 The tension in the scenes between Skye and Ward was great. Ward is doing his best to keep calm and keep Skye working. While skye is doing her best to block the progress without alerting Ward they are in the wrong location. But Ward is specially trained and quickly realizes that she’s hiding something. Skye manages to cover it up just when some more undercover FBI agents emerge, similar to how they followed Maria.

May dug up Coulson’s grave to find a hard drive. It required Level 10 access with supervision of Director Fury. Whatever was on that drive about TAHITI must have been important.

Considering people came to Providence, Skye really needed to stall. Talbot emerged with his mustached glory and dispatched Providence. Moments later, Maria Hill emerged having informed special forces of the location.Maria is determined to give up Providence to the government and she wants Coulson along. However, Coulson’s team are subject to the law. When Maria learns that Ward was HYDRA she was shocked and appalled. The deal she was ready to make with the government moments before, went out the window. Maria helped Coulson take the team out and then they moved.

It was a great moment as Skye let out her feelings about how she thought Ward was disgusting. The cops were surrounding them in the dinner and she didn’t hold anything back. She let Ward know exactly how she felt about his betrayal and it felt like justice. Then the cops went to arrest them. Ordinary cops, unsurprisingly, weren’t much for Ward. However, they did provide enough distraction for Skye to make a run for it and attempt to be arrest. Ward shot the two officers and stopped that plan, but she got in the car and drove off with Ward yelling about how she didn’t understand. She didn’t make it very far before a man stood in front of her int he road, only to leap into the air and pull her from the car. Yes. It was Deathlok.

On the bus, Deathlok revealed that he was shadowing Ward. He took care of Ward. His success relies on Skye doing what he wants. That means she has to be willing not to . Skye calls it out clearly that Ward is a nazi. Ward has it in his head he is just a soldier and nothing was personal. Skye calls him on his part in everything that happened to her. She finds it foolish that Ward actually cares about her. The idea makes her sick.

Skye tries to reason with Mike Peterson. Mike was furious about leaving his son with Skye. His son was under the control of HYDRA. Instead of killing Skye, he stopped Ward’s heart. Skye isn’t a killer like Ward and she eventually has Deathlok stop. She reveals the location necessary for decryption and they are quick to get the bus in the air. Before they can take off, Hill and Tripp stop Ward up. They guy time as Coulson sneaks onto the bus. Ward said some nasty things about Fury and Hill, but Hill let it roll off her back.

Coulson gets Skye out of the holding room. Along the way, Skye informs Coulson about Deathlok. Coulson’s original plan to take out Ward went out the window. They fled as Deathlok and Ward pursued them. In a nice use of Lola, Coulson and Skye flew out of the bus and landed safely. Ward wants to go after Coulson and Skye, but Garret’s orders are for them to return. They have the data so Coulson and Skye are no longer important. Deathlok even pulled the nothing personal line on him. Must feel like a bitch to be on the other side.

Maria makes it very clear to Coulson that there is no SHIELD anymore. She’s continuing to claim that Fury is dead. She isn’t encouraging Coulson to not get his revenge, but she doesn’t think they need to stay together. Their time is limited. The reunion and sanctioned orders aren’t coming again. She even claims Stark would take him in, but he still doesn’t even know Coulson is even alive.

There was a sweet moment between FitzSimmons as they talked. Fitz asked Simmons if she was HYDRA which she denied. they really care about each other which is great. The whole team indact hung out at the motel. Tripp eating snacks, clearly under Coulson’s lead. Coulson has a dedicated team. One blow isn’t going t destroy them.

May came back to Coulson. It turns out that Coulson was the person behind the research of the TAHITI project. Apparently the results of the drug have devastating effects. So much so that Coulson turned in his resignation.