Everyone is celebrating Unity Day. Most people seem to be into it, except Finn. During Jaha’s speech we saw that not all of the 100 are really happy that people are coming down.

It got really dark really fast when we saw a child blown to pieces in the midst of the ceremony. It was chaos afterwards. Kane’s mother was a fatality of the attack as a large shard of metal went through her. While he was brushing her off shortly before this event, you could see the pain as he said his goodbyes to his mom as she died in his arms. It was a moving moment among the tragedy. Kane may have lost his mother but he’s very intelligent and realized who may have been behind the attack. With their plan now messed up, the idea is to try to take the first drop ship down. While she is just pissed that they didn’t build a bigger bomb.

Clarke and Bellamy are really bonding. While everyone is having their Unity day party on Earth, Bellamy encourages her to have fun before the exodus ship lands. Turns out that Raven is helping Bellamy make more bullets. Again, Finn doesn’t like it all. It’s clear he’s a pacifist and he doesn’t want to be involved. But it’s driving a bit of a rift between Finn and Raven.

Octavia is still all lovey dovey over Lincoln. it’s clear they created some sort of system so she could find him. She follows his lilies and they make out. It isn’t just that with them as it seems that Lincoln is traning Octavia as well. After they hooked up, Finn caught them together as Octavia left. While he was initially ready to attack, Octavia called him off and he actually gave in easy. Lincoln revealed that he could speak english to Finn. Together they try to set up a meeting between the grounders and the 100.

Finn quickly heads back to get Clarke. But Clarke has turned from a peace loving person and was hesitant to go meet with Lincoln. She doesn’t seen any good in the grounders, but after some badgering, she agrees. When she claims to get her bag, she warns Bellamy. She wants his back up and she wants her back up well armed. Bellamy brings Jasper, who is hitting on Raven, and Raven. Clarke is playing Gretel and was leaving a trail for Bellamy to follow.

Lincoln ran to Octavia and they embraced. I could have done without the whole Romeo and Juliet of it all, but Bellamy’s reaction was great. Clarke is ordered to go to the grounders, even though they have weapons, breaking the whole deal. Anya introduces herself, but handshakes were not in order. turns out the flares they shot off, burned one of their villages. Turns out a number of things the 100 have been doing have impacted the grounders and they see it as an act of war. They are ready to great a peace, but with Clarke unable to ensure that the new arrivals will obey the terms then it would be foolish. Anya feels confident that the grounders could handle an attack. 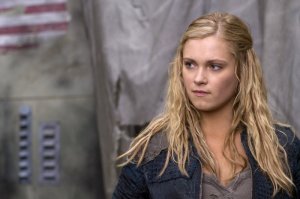 Jasper noticed grounders in the trees and attacked. All hell broke loose. Everyone got out fine. But it’s clear that Finn and Octavia trust the grounders as much as the grounders trust them.

Back on the Arc things were no cakewalk. All the workers began mutineering and Kane was the first attacked. It’s funny that in the early episodes Kane was the bad guy. Sure he has some rough edges, but he’s largely a good person. They are now certain that Diana was orchestrating everything, but Jaha was too late by the time he reached Kane as Diana had already begun the process. Diana ordered her men to clear the exodus ship of anyone who wasn’t loyal to her. It really isn’t clear why they believe in her, but it’s clear they are willing to drain all power from the Ark to make sure the ship is ready and anyone who gets hurt in the process is just collateral damage. It makes them come off as generic bad guys. Diana ordered everyone not loyal to be thrown out. Abby almost snuck by unnoticed. Diana even offered Abby a place. Abby tried to open the hatch, only to be knocked out. Everyone in the drop ship was willing to not just accept that not everyone was going to the ground, but let everyone else die in the process, preventing anyone else from going. It was the most selfish thing they could have possibly done and I’m hoping that the grounders kill them all if they survived that crash.