Well that was a packed season finale with more action than one would assume based off previous seasons. The result, however, was both fulfilling in that it felt like there was closure, while also seeing what may come next for the people before us. 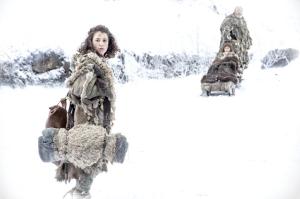 Since we left off last episode with Jon Snow foolishly heading out to speak to Mance in hopes of fostering some sort of treaty with the wildlings before another attack is launched on Castle Black. It was a foolish plan, but Jon met with Mance quickly in a rather cordial meetings. Sure it could have been filled with a lot of hositility, it did brim nicely under the surface, but the two men were able to talk about Ygritte. The two managed to express their hopes for a treaty, when a massive force flanked the wildlings camp interrupting the pow wow. It was Stannis and Ser Davos with their massive army they bought with the money they got from the Iron Bank. Stannis not only shut down wilding movement (ending Jon’s worries), but also took up temporary base at Castle Black as all the bodies of the lost were burned to prevent wights returning.

Speaking of wights, we saw a lovely wight attack on Bran, Jojen, Meera, and Hodor as they moved further North. Jojen who was weak already was grabbed by a wight from beneath the snow. The result was an all out battle in which Bran walked Hodor in order to fight the incoming horde. I have to give it to them that the way the wights looked was fantastic. I immediately remembered Pirates of the Caribbean: The Curse of the Black Pearl and the walking skeletons looked great. It made the fight feel more engaging as they eights moved like real people rather than just limp skeletons. In the end we lost Jojen to the wights and Meera seems to be handling it well so far. More importantly we met the children. People who are of a race older than man and the old man who leads them is the three eyed raven.

Then there were the events near the Eyrie. Brienne and Podrick finally met up with Arya and The Hound. In fact for a moment, Arya and Brienne shared a rather nice, if tentative, exchange before The Hound essentially out Brienne for having ties with the Lannisters. There was nothing to do to stop the oncoming fight between Brienne and The Hound and boy was it a good one. There have been a lot of great fights on Game of Thrones, but this one will always have a very special place in my heart. It as the gritty nature of the fight. As both Brienne and The Hound acknowledged that they were not knights and they did not fight like it. So when Brienne bit The Hound’s ear off and tossed him off a cliff it was exhilarating. Unfortunately the fall didn’t kill The Hound and Arya wouldn’t spare him and put an end to his misery. Instead, Arya took his money and walked off finding a ship that was going to take her to Braavos, with her utterance of “Valar Morghulis” and off she goes.

Tyrion’s fate was finally sealed as Jamie hurried off to free Tyrion from his cell. Tyrion left to his own devices encountered Shae who was resting in a bed after sleeping with Tywin. In a fit of rage, Tyrion killed his former lover, then headed off to speak to his father on the privy. Yes, Tyrion bounded right in with a cross bow and bolts. After a rather hostile exchange, Tyrion killed his father with two bolts to the chest and hurried off to Vaerys so he could be shipped to safety in secret. With Tywin dead, Cersei will get exactly what she wants, the freedom to stay by her son’s side rather than marry Loras. Though, she’d already made that personal decision and declared it by yet again sleeping with Jamie in defiance. Only now, she doesn’t need worry about what daddy might say.

And let’s not forget a few moments with Daenerys that were snuck in. Looks like her plan to free the slaves is failing as a number of slaves wish to return to their masters because they have no lives worth living on the streets. It is a bit of a problem and Daenerys did spring the change on them with no terms of change of service. As a result she had to grant people the ability to set up on year contracts. Even more of a problem is her dragons moving on from killing livestock to killing children. The result was Daenerys locking up two of her dragons in the catacombs.