Game of Thrones Season 4 was really about driving home the emotional torment and seeing how our favorite and least favorite characters progressed when facing the challenges before them. This season was certainly less action packed than previous season’s but still offered up a hefty amount of intense sequences that shined as some of the best in the show so far. Things are beginning to fall in line as things in the world of Westoros are on the brink of change yet again. Season 4 delivered a spectacular set of episodes this time around, while unashamedly delving further into the world of fantasy than any previous season. The result was a season that felt both subdued and epic at the same time.

Started with a bang

Game of Thrones wasted no time when it came to delivering big moments. Audiences were still reeling over the sudden deaths at the Red Wedding that dispatched both Catelyn and Rob Stark, when they were thrown into yet another disastrous wedding, the Purple Wedding. After all the hard work that Margeary Tyrell put in to wooing the absolutely horrible King Joffrey, he was unceremoniously dispatched at his wedding by an unknown force that turned out to be Littlefinger. While this wedding disaster wasn’t an all out bloodbath, it did make it clear that weddings in Westoros are a dangerous.

No one is safe 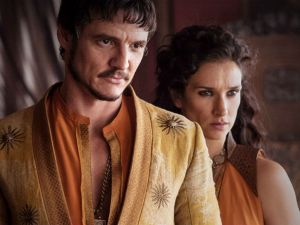 The world of Westeros has never seemed like a particularly friendly place to live in. It’s a world of war and deceit and the result is that nearly anyone can meet their end in the flash of an eye. No one is really safe in this world and this season hammered that idea further home. Prince Oberyn was introduced with a flurry of fanfare that many characters don’t receive. To add to it Oberyn operated with a different pace and language that we hadn’t seen much on the show. Paired with his beautiful, enigmatic portrayal, Oberyn was a treat to audiences, however even he was snatched away from audience when he fought the Mountain. Oberyn wasn’t the only loss that we suffered this year. As each of these characters fell, it became particularly clear that while the earlier part of the season made our characters feel safe. The latter half of the season tore that safety from under us as we saw death after, death after death.

One of the main highlights of the season was the trial of Tyrion Lannister for the death of King Joffrey. This story line really gave the audience the chance to see why Tyrion is so liked on this show. He is draggred through the dredges with both his sister and his father hoping to have his head on a stick. Through all of that Tyrion remained strong as everyone that was close to him betrayed him, except for his brother. Some of his interactions while he was in the dungeons were some of the best scenes of the season. 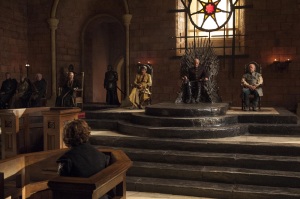 While he may not have got off scotfree, it was nice to see him get his revenge on the two people in his life that should have loved him the most, but instead brought him even more pain in the process. For Shae, it as her betrayal and petty disloyalty that brought her to her end. Some people may think that killing Shae was a low point for Tyrion, but I am of a different camp. Tyrion had loved Shae dearly, and she knew that, but it was her pettiness and inability to see the big picture. Her relationship with Tyrion was a hazard to him both, but she took his ending it not as the loving thing, but as a selfish thing. But Shae took petty to a new level, not only lying to convict Tyrion, but then sleeping with his father. Shae got what she deserved. As did his father. Tywin’s hatred for Tyrion is extremely similar to Cersei’s however he was more willing to allow him to live. That didn’t meant that when an opportunity to have his son killed was presented he wouldn’t seize it. It’s quite a shame that Tywin hated Tyrion so vehemently considering, that Tyrion was probably the most family loyal and conscious out of all of the Lannister children. His inability to appreciate Tyrion in the slightest has now cost him his life. Good riddance. Though it will be unfortunate to no longer see Tywin’s calculating mind play out on screen 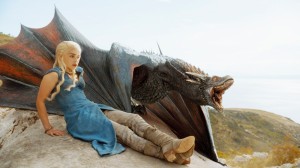 I am a big fan of Daenerys. This is mostly because she is the strong female character that I love to love. She is both strong, but not infallible and still embraces her femininity. Dany is a leader and seeing her make slow strides toward taking back her rightful place on the Iron Throne, but there are times when we see that not all the decision that she makes are for the best. This season we saw Dany’s attempt to free all the slaves backfire. First her previous conquests over threw their temporary governments, resulting in the cities reinstating the slavery Dany worked to end. Upon realizing this Dany chose to take up the throne in Meereen, her latest conquest. Other than feeling out of place as she finally remained sedentary for the first time in her entire arc, she had to deal with the tedium of being a ruler and meeting with her subjects. Through these meetings, Dany met her most difficult challenges. It all started when we saw her largest dragon snap at her in the first episode, signalling the beginning of her losing all control of her beasts. First of admitting that keeping the masters on the most maybe wasn’t the most humane thing to do and allowed them to be taken down for a proper burial.

However, that wasn’t the emotional turmoil that presented itself before Dany this season. Instead, her real personal arc was about coming to terms with the danger that her growing dragons posed. The first victim was a flock of sheep that was picked off. But when her largest dragon, burnt a three year old child to nothing but charred bones. Dany had to make the decision to chain up her smaller dragons in an attempt to keep them from hurting others. As the mother of dragons she had to make the tough decision and you could really see the toll that it played on her. Unfortunately, that was the biggest story for Dany aside from casting Ser Jorah out form her inner circle after learning of his betrayal. Dany’s arc was about her learning to be a proper ruler. That however, doesn’t always play out to be the most interesting story lines on screen. Game of Thones at least managed to keep this interesting.

There was a suprising amount of material that took place both in and around The Eyrie. The most interesting events around the Eyrie actually focused on Sansa and pseudo guardian, want to be lover Petyr Baelish (aka Littlefinger). After managing to get Sansa out of King’s Landing before being implicated for the murder of Joffrey she found herself an unwilling accomplice to his murder as well as a captive within a relative’s home. Staying with her Aunt Lysa under the guise of Littlefinger’s niece, Sansa was put in a position that made her appear as though she was stealing the affections of Littlefinger, all while her bratty cousin threw hissy fits. Lysa was not crazy about seeing Littlefinger’s affections toward Sana, even if they were one-sided. Her obsession with Littlefinger drove her to try to kill Sansa, but instead was pushed through the moon door by Littlefinger himself. After brief trial the two whisked off to somewhere else safe as Sansa sported a new, darker look.

These events in the Eyrie have finally sent Sansa down an interesting path. Previously she was a young naive girl. Sure, she learned a lot about the way things worked in Westeros during her precarious time in King’s Landing, but it wasn’t until her arrival at the Eyrie that she began to take her fate into her own hands. It was wonderful to see Sansa begin to flourish and play the political game and lie for her own sake. She has a very good teacher in Litlefinger and it will be nice to see her journey.

That wasn’t the only thing that happened in the region of the Eyrie. We also saw a wonderful encounter between Brienne and Arya as the two traveling pairs met up. It was a brief moment, but there was something wonderful about seeing Brienne bond with Arya unknowingly for a moment. They are very similar women, who can take care of themselves. However, Arya is heading down a far darker path. It’s worth noting that the fight between Brienne of Tarth and Sandor Clegane The Hound was beautiful. Unlike many previous fights on the show, there was something real to this fight as the two shared harsh blows and ruthless attacks before Brienne ended The Hound. The more notable result of the fight was Arya’s departure from The Hound. The pair had been great to watch, but that never changed Arya’s hatred for the Hound. Seeing her unwilling to end The Hound’s life even as he begged was a big moment for her. In many ways it sealed her departure for Braavos and the darker path she is intent on going on. 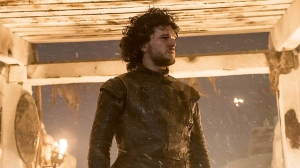 The phrase has been uttered for three years now and we’ve yet to see winter arrive. Sure, seasons may work differently in Westeros, but it’s curious that Winter still has yet to arrive. Even still, Mance Rayder knew it was coming which was the whole reasoning behind the wildling descent upon the wall. He just wanted to make sure his people were in a safer place when Winter does finally decide to rear its ugly head. The result was a lot of anguish for Jon Snow, as he spent the majority of the season trying to plead with his superiors about how it dangerous the incoming attack would be. Time and time again he was undermined for being a semi-traitor. And the wildlings came in full force, so much so that an entire episode was dedicated to their attack on Castle Black and the Night’s Watch. However, with Stannis now at Castle Black it will be interesting to see where things go from here.

All of those book readers will know. I, however, am not one of them so have no idea of what to come. For that reason, I’m not going to go much in to what I think is going to happen in Season Five of Game of Thrones. Instead, I will say that I’m most interested in what comes next for Arya, Sansa, and Tyrion. Until next season, remember this fun moment.

Nobody stomps on Winterfell

What did you think of the season? Oh and be nice to people, no book spoilers.