Eggs can stand up straight without falling over. Yes, I am taking not of the little things that like to show themselves as evidence that this is the near future. Oh and there are games with lasers and metal ball bearings. I don’t really get it, but it was’t for me to get but to show Molly bonding with her humanich son. 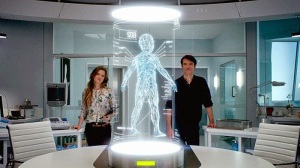 John’s storyline is entirely about human machine relations and the strains that arise because of their existence. this means exploring the tensions that are arising between John and a female board member who was particularly against the funding. Her belief that making these machines would destroy the connections people have with one another as they bonded with their machines. (A topic that was interestingly handled in the manga and anime Chobits).

Molly’s main focus this episode was spending time with her son. We got to see their bond and how they were different both of them. For one Ethan is not a human, while Molly is dealing with her strange pregnancy. Ethan is truly different than other kids as we saw when the virtual elephant scared everyone in the museum, while Ethan actually moved closer. It grew particularly creepy when Molly tried to teach Ethan about secrets. Ethan’s question about her being weak just after he learned that neanderthals were replaced by homo sapiens because they were the weaker species was particularly creepy.

This week the space flashbacks weren’t of Molly, but did prove that her experience was not unique. Whatever was happening out in that space station was intentionally changing people. In the case of Molly she is also showing the same post return brain scans as the man who faked his death (Harmon). Between Molly and Harmon there is a mystery that is popping up. Yes, Molly’s pregnancy is a part of that, but only a small part. There seems to be a lot more going on. Harmon believes that they were experiments themselves and the shady behavior from the company is enough to have her at least considering it. The fact that Yasumoto knows that there is something out there that they were trying to make contact with and that he is using John for humanichs. It makes you question if Yasumoto is attempting to build a sentient army against these creatures.

The strange trend that this show seems to be sporting is two storylines. It wouldn’t be so jarring however, each storyline is very distinct on their own. There is the mystery and corruption surrounding Molly and Harmon. It is a solid sci-fi mystery that is presented here. Then there is the humanich storyline which is a bit more heady and focuses more on interactions between people and their fears. They have multiple players that are crossing paths of each story, yet it doesn’t seem to be merging together.