In an effort to both raise awareness and put out more content prior to the release of Marvel’s most questionable property, Guardians of the Galaxy, a series of prelude comics were published prior to the films release. Each of these comics is directly associated with the Marvel Cinematic Universe as these are tie in pieces. It is exciting to see the comics come together with the cinematic universe. However, these comics are meant to introduce the characters and the plot line that we will be seeing in the movies. Unfortunately, these introductions are preaching to the choir, the comic book readers who are already likely introduced to the characters. What they really needed to do was to create some sort of TV special, like Captain America:The Winter Soldier had a Marvel special. That said, the comics were a nice little treat if not a bit disjointed.

Guardians of The Galaxy Prelude Part 1 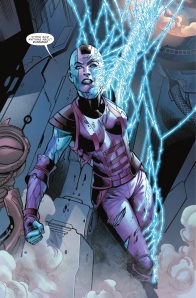 Guardians of the Galaxy Prelude Part 1

The first part of the prelude focused mainly on Nebula. and her relationship to both Thanos and Gamora. While the concept of this particular issue was rather interesting and some of the content is compelling, it felt disparate. Worse yet, The train of thought came across as deluded and self-obsessed. Nebula mes across as a woman who would move the heavens and hell to do something that Thanos would approve of. To that end, so would Gamora, who we saw betray Nebula at one point in order for herself to succeed. We saw Nebula and Gamora work together as well adding to the confusion as to what Nebula actually feels for her surrogate sister Gamora. While it is entirely clear that Nebula and Gamora don’t have the most loving of relationships, it seems like they last left off in a relatively mutual place.

Guardians of the Galaxy Prelude Part 2 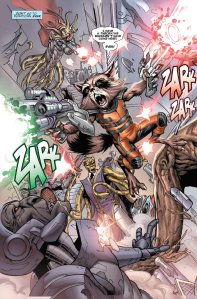 Guardians of the Galaxy Prelude Part 2

This was by far the most engaging of the stories that were told. Sure, we didn’t learn very much as it acted more as an introduction to the relationship that is Groot and Rocket. Thankfully, I’m glad to say that the portrayal of their relationship was rather relieving. The way the two characters were able to banter and play off each other was entertaining even if Groot is monoslyyalbic and the only way we really know what he is saying is by Rocket responding. The plot seemed to be a one off as Rocket accepted a rather precarious job that became even more shady. However, it gave Rocket and Groot a chance to show off how powerful they are as well as the fact that they have their hearts in the right places (don’t let Rocket’s gruff fool you). The result was a story line that was there to do nothing more than show off how great of a pair Rocket and Groot actually are.

Guardians of the Galaxy Infinite Comic 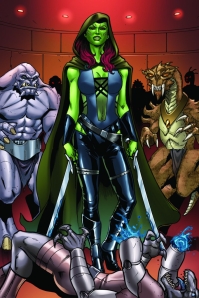 Guardians of the Galaxy Infinite

The final tie in material strongly resembled the post credits scene from Thor: The Dark World in which Taneleer Tivan is depicted coming into the possession of the Aether (one of the infinity stones). This was then followed by his desire to collect more of the infinity stones, which honestly makes sense not just because they are so powerful, but because he is the Collector. He enlists the help of Gamora, who’s recently been set straight in her ways. Now she is trying to redeem herself from her past sins and that means creating the tenous partnership with Tivan. With both parties reluctant, but both not wishing for the next stone, the orb, to fall into the hands of Korath. If you haven’t figured it out by now, this is the same orb that Nebula was going after in Prelude Part 1, and that we see Korath trying to take from Star-Lord in the trailers. So now, we have some of the more touchy characters established and the starting point of the film in play.

Issues
As I mentioned previously, these tie-in comics are great. It is really fantastic to be able to look at the characters and say that we see where this is all going. It was even better getting to see Groot and Rocket do their thing. unfortunately, the tie-ins are comics. Thus they are the people most likely to know the most about Guardians of the Galaxy anyway. That means the pre release of these comics really does nothing to boost the sales or awareness toward the movie.

What did you think of the tie-in comics?

One thought on “Guardians of the Galaxy Prelude Review”