Gotham succeeded within moments of portraying the gritty city that is Gotham. It is a place where criminals will kill victims in front of children. Where cops have no qualms with shooting a criminal if things even get slightly out of hand. The place is dirty and cops are willing to look the other way if there are some problems. Everyone except James Gordon. Gordon knows things are bad, but is willing to see the light. 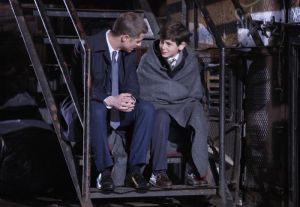 Within the opening moments it’s clear crime is rampant. We saw a young Selena Kyle stealing money and feeding a cat stolen milk. That’s all moments before she sees a happy Wayne family brutally altered. Mind you this is all within the first few minutes of the episode. It’s an effective moment. It is without a doubt the strongest moment of the episode.

Gotham is dirty. it’s filled with crime and common muggers. From the looks of how nasty the city is, there won’t be any problem with the show maintaining a stream of enemies and opponents on the streets and within the GPD will be no problem. If there is dirt within the cops it’s no surprise that there is trouble within the dirty underground. Within this first episode we already know that Cobblepot is trying to push Fish out of power.

The episode had a string of strong personalities. More interesting was that the strong personalities were often pushed to the side while only being briefly in the picture. Instead the focus was on Gordon and Bullock which was a good thing. The two have plenty of chemistry as a pairing that but heads and have very different methodologies. One thing that I noticed was that Donal Logue as Bullock often overshadowed Ben McKenzie’s Gordon. Gordon feels not like an innocent but an apathetic idealist. At least it seems the show will be going forward as Gordon learns how to properly navigate Gotham and his own morality.

There was a string of introductions. Selena Kyle witnessed the Wayne murder. While Edward Nigma was one of Harvey Bullock’s contacts. By Fish Mooney’s side was an overly aggressive Oswald Cobblepot (and don’t call him penguin, he doesn’t like it). You can’t forget that Ivy was encountered as one of the potential murder suspects in the Wayne murder. While Barbara also had a a connection to Major Crimes’ Montoya. It was a mess of characters and it was entirely unnecessary. We didn’t need to see all of those characters make an appearance just so we know they are there. The inclusion of Cobblepot would have been enough. It was the most engaging inclusion anyway.

Fish Mooney is bad. So very bad. She holds her own and rules with an iron dist. She has lackeys handle the dirty work, but isn’t too good to not take a swing herself. She handles her own and has her own nasty operations that seem to reach into everything. She handles things in her own way. Jada Pinkett-Smith seems to revel in playing this role and it shows. Sometimes it shows in not such a good way, like a snarl when one isn’t necessary. Thankfully there are more moments than not that are absolutely perfect in their execution. Her thrill and excitement as she takes on those who attempt to wrong her. She’s thrilling to watch. But even she has a boss who comes in the form of Falcone (who is possibly even more interesting as a villain).

What do you think of the episode?