The Strain started it’s season alright. It was just alright, nothing special, but very early on it was clear there were something there that could make the show special. Unfortunately, The Strain often struggled to show everyone else that it deserved to be watched. There was a very long stint particularly in the early part of the season where we were dragged through mundane happenings before we got to the good bits with lots of vampire action. Despite it’s failings, The Strain ended up keeping my interest, even if my enthusiasm waned.

The Strain and Horror

First and foremost, The Strain is a horror show. Thankfully, it never seemed to forget that even when the show lulled. There were plenty of thrills peppered throughout the season and close moments that make you worry for the well being of the characters. When you have scenes like Joan creeping through her house, flicking her head to the side like she sensed better with it like that, as she stalked her own children was one of the most haunting scenes of the show. You also got episodes like “Creatures of the Night” and “The Third Rail” that know how to amp up some of the tension and make you fear for the characters.

The vampires on this show were very well executed in comparison from other depictions of vampires. Rather than the seductive, almost angelic looking vampires that we’ve become accustomed two we saw a very different type of vampire. A vampire that slaughters and kills mindlessly. We saw vampires that were hobbling around and working almost on instinct, attacking and infecting. In fact, the vampires acted more like zombies in that nature as they shambled about attacking anything that was alive. Their movements was what made vampires on this show scary, threatening, and more dangerous than ever before. It was nice seeing that the low level caste of vampires didn’t have any special powers, instead just more worried about infecting others and carrying out the masters orders. 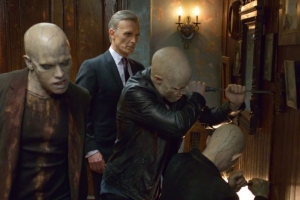 One of the major downfalls of the season was the pacing. For much of the season it just didn’t feel right or even. There were thirteen episodes in the season, and while every single episode did have a vampire in them, it wasn’t until episode six (“Occultation“) that the vampires really felt like a threat upon society. Heck until then, there were only a few odd vampires wandering around likely only turning the homeless and those who crept around at night. Occultation was the turning point in which the city dipped into chaos (something that wasn’t well depicted for a massive city like NYC, but that’s a problem I can let slide). That means for six episodes were were dealing with the human problems associated with the vampire plague. Even worse, we had to deal with human problems like Eph’s failed marriage. I believe there was also an alcoholism issue in there too that wasn’t majorly touched on throughout the season to make the final moment of his drink really mean anything. The point is the former part of the season was sluggish, focusing on what happens when a person goes from human to vampire. Ultimately, we didn’t need quite so many episodes to highlight just how drastic the physical change was. Was it necessary to spend so much time on characters that would ultimately become lower caste vampires, relegated to the background for the audience to go “Ooh, I remember him”. An idea that is foolish when you consider that aside from the few identifiable vampires, most vampires looked barely identifiable. (How did Gabriel not lose his hair like everyone else?)

The season took us through a string of flashbacks of Abe’s past. I mentioned previously that the ages indicated previously don’t seem to line up as Abe seemed to be somewhere between 17 and 21 during his time in the concentration camp. That was 70 years ago, making Abe bordering 90. He must be the most spry 90 year old I’ve ever seen. The actual scenes in the camp were well done and sensitive in their nature. Smartly they stayed away from depicting humans killing humans and instead focused on the real focus on the show, the legend of the Strigoi. 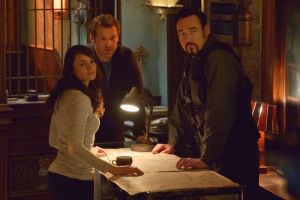 The characters were the biggest issue of the season. Many of the characters came off rather unlikeable. Not to mention the deluge of characters that we spent so much time focusing on early in the season only for them to become husks of their former selves, forgotten and no more than a servant. We spent roughly four episodes, watching the flight “survivors” deteriorate until they were nothing but attacking beasts. We saw how tragic these cases were, but it was hard to care because aside from the pilot, the others were rather obnoxious characters before their transformations. Joan was an absolute horror. Gabriel was an uncharismatic rocker. Even Ansel didn’t come off as a really great guy, despite being a decent dad and husband. There was so much focus on them and their negative traits, that it was hard to sympathize with them once they were vampires.

As for the other characters, they also struggled. This is in large part because of the awkward pacing I mentioned before, but also because many of the characters acted in foolish ways. If someone walks up to you and says there are vampires and you need to lop of their heads if you want to survive, I would listen. Then again I’m not normal, but a normal person would be skeptical and likely think them crazy. Which is why the initial reactions from Eph and Nora were so great. They reacted like normal people at Abe’s proclamations that something terrible was afoot. To them they were just seeing the beginning of another outbreak. Potentially deadly yes, but not cause to go taking off heads. That reaction didn’t work after they had seen the mutations the pilot went through, his deterioration as they monitored his condition. When they were attacked by a mouth like think sprouting from inside the pilot’s mouth that had teeth of it’s own, that’s when their tune needed to change. They saw and examined what happened to the pilot. Witnessed first hand that they were dangerous. Yet, it took them another few episodes before they even really accepted what was happening. That made them stupid, and it was frustrating to watch. However, I understand the show’s want to have characters grow to accept the struggle. Not everyone can accept that they need to go running around killing each other to survive, some people need to let others handle that. However, I never saw the hesitance in Eph and Nora, they were capable from the beginning. Even as they were killing out of necessity, they seemed incapable of understanding that it truly was a necessity. 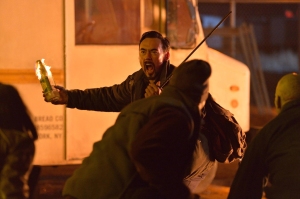 Then we had characters like Gus and Vasiliy. The two were easily my favorite characters in the season. When they were on screen they lit up, reveling in what was happening around them. They unlike Eph and Nora, didn’t need a long time to cope with what needed to be done. Instead, they saw what was happening and rather than sit around to see if there were other possibilities, they fought from the start. They easily became some of the most interesting characters, not because they would get their hands dirty. They were interesting because despite things going wrong for them, they didn’t ever want to give up. When curveballs were thrown their way, they dealt with them.

We knew little of the inner workings of the vampire world and how exactly their caste system works. Actually, we still don’t know much of how it works. The finale also left us, uncertain of all that vampires are actually capable of and what they can withstand. It was clear that The Master didn’t die when he was thrown into daylight. Yes, it hurt him, but he was able to scamper off into safety. Is this something that all higher level vampires are capable of? Or is this just a skill that the Master has been working on? All that said it doesn’t really matter because he’s being hunted by both Abe’s gang and the Ancients. Hopefully this will bring about more interesting stories with The Master directly. So far, we know little of what he wants or why he’s trying to infect so many people. It is clearly against the will of the Ancients. Speaking of the Ancients, I am hoping we get to see a lot more of them and the militaristic force of intelligent vampires that they have. With Gus in the mix, I’m sure their screen time will increase, but I don’t want this to end up like the Eichorst Master relationship. We need to see The Ancients, what they are capable of, and why we should be scared of them even if they also want the Master taken down.

Check out The Strain season 1 gallery here. What did you think of the season?