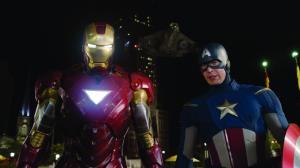 With the Marvel Cinematic Universe now established, but still young rumors of which storylines each film will tackle are common place. For a while now, people have been rallying for a chance to see the Marvel event series Civil War brought to life. Initially the back and forth of Robert Downey Jr’s interviews as he promoted the Judge seemed to indicate that there may be an Iron Man 4. It was clear that it was the result of contract negotiations now as reports are indicating that Robert Downey Jr will be a part of Captain America 3 helping to bring the Civil War Story line to screen. Reports are split between the upcoming Captain America movie being subtitled Fallen Son or Civil War. Captain America 3 had previously been announced that it was the May16th, 2016 film that wasn’t budging for Batman v Superman: Dawn of Justice. If this had been the plan or idea for a while, it may be why Marvel was so confident about the date despite Warner Brothers trying to inspire them to blink first. 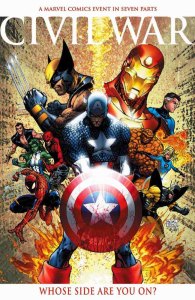 All the excitement and buzz seems to be surrounding the idea that Tony Stark will be back on screen. Tony Stark has been the cornerstone to the Marvel Cinematic Universe. If there was no Iron Man there would be no Marvel Cinematic Universe. Not to mention how attached people have become toward Tony Stark over the years. He’s more than just a character in the Marvel Universe and audiences can’t get enough of him. That means that people flock to see him when he appears in a project, but that also means that he has gained major leverage as to when he appears and how much money that he gets. Captain America: The Winter Soldier, proved that Marvel can produce high quality stories, with characters with more regional appeal. (And yes, Captain America is loved the world around, but the America in his title does color his reception in some markets, even if the Marvel banner helps overcome much of this.) Adding Tony Stark back into the mix suggests that they wish to make Captain America 3 an even bigger event than before. And let’s be honest, Captain America: The Winter Soldier had major implications on the Marvel Cinematic Universe as a whole causing ripples through it all. 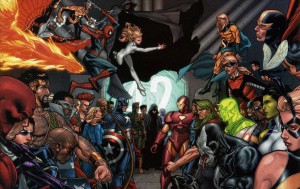 Civil War is a major comic event that ran in 2006. It rattled the entire Marvel Universe and divide our heroes. All levels of heroes were effected and the suggestion that Captain America 3 will tackle the massive event is startling. Yes, there was a main storyline that comprised and concisely tied together the most major of all events into one story. Even focusing on just that story is a huge undertaking that seems hard to really indicate the weight of this storyline. We have had 10 movies so far with 6 individual franchises. It is a small fraction of the number of heroes that the Civil War storyline effects, which is all of them. Put it this way, in the comics there were over 100 issues that either impacted or was impacted by the Civil War story line and that doesn’t even include the aftermath with changed the landscape of Marvel for a while. To think that a single movie could tackle the complexities of this issue is highly unlikely, which is why I had previously suggested that the Civil War storyline be tackled in a mini-series format. That would allow the time to explore more of the dynamics and how much of a divide the issue really causes between the superhero community.

I’m am not disillusioned. This will be a movie and there is no possible way to tackle all the characters involved. There’s no way that we will get the sprawling epic that the story implies. If we see a bunch of the lesser known characters like Moon Knight, Thunderbolts, or New Avengers. We also won’t see how the X-Men impact the story, a segment that can easily be left out. Spider-Man played a pretty decent role in the story as well, but we won’t see that on screen as he is Sony’s property. The Fantastic Four also won’t be making their way to the screen, despite the gut wrenching tear that occurred through them as they went different directions (including Reed’s analytics pushing him squarely to one side of the divide because he saw it as the statistical best resolution). Which will boil the story down to the basics, supers are causing catastrophic destruction to cities and they need to be held accountable. On one side of the issue will be Tony Stark and on the other will be Steve Rogers. Any additional characters we see on screen will have to be icing on the cake. 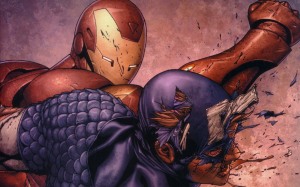 One can hope that they choose to tackle this in a much broader sense, with Captain America: Fallen Son being the first film in a series of films that will cover the aftermath of the story. Not to mention that dragging it out over 2 or 3 movies would allow for some very interesting potential story lines on Agents of SHIELD and the upcoming Daredevil as well. It also would allow us to see more of the impact of what this all means for the Marvel Cinematic Universe. registering all heroes, powered or not, has many implications on the world that we are seeing built before us. It makes people vulnerable, because it exposes them to the public and to villains (who also must register). By making Captain America: Fallen Son a part of this bigger issue rather than the beginning and conclusion to this Civil War. However, this method also poses issues to a big moment that occurs at the end of the story. So far it seems that some reports are suggesting it could be the beginning of a big tail. That’s what we will get Captain America vs Iron Man. The rebellion vs the Institution. What is right and what is wrong will come into question. Most importantly it means that the rumors of Steve Rogers hanging up the shield and Bucky taking over may come to fruition.

The news of Robert Downey Jr’s involvement with the film also came with the news that Marvel was seeking to have the Russo Brothers step in as the replacement to the Marvel godchild that is Joss Whedon for the Marvel Cinematic Universe. After the success they pair had with Captain America: The Winter Soldier it is unsurprising that they are being sought after. Most directors that walk in to Marvel have turned away after their experience, or in the case of Edgar Wright before it even resulted in a film. Marvel has been known to be somewhat difficult to work with as they restrict various freedoms and liberties that directors are used to when they are working on their own projects. Marvel is different because they have an entire cinematic universe to look after. An entire universe that they need to make sure that the tone is right and certain decisions don’t too heavily impact other franchises. This means that directors need to work into parameters. For Joe and Anthony Russo, this is something they are more familiar with having worked in TV, where directing conditions are more constrained. Thus far, we only 4 directors (or pair) that have returned to work with Marvel: Jon Favreau (who’s part was more sequel than universe and drove him to not return for 3), Joss Whedon (who also worked on TV), the Russo brothers (who have worked on TV), and James Gunn. (Have I mentioned how surprised I am that Nathan Fillion hasn’t had a larger role in the Marvel Cinematic Universe considering he is a favorite of both Joss Whedon and James Gunn. Hopefully that changes). Those who have returned have noted that while it can be difficult working with Marvel, it is also rewarding. They seem to know how to work within the system to produce something that both parties enjoy.

Now the real question is how are they going to pull off this storyline in a short time frame, that is if the rumors hold any bit of truth?

What parts of the Civil War story line would you like to see make it to the screen.