Grant Gustin is endlessly adorable and relatable as Barry Allen. At least he is to me. He’s nerdy and knowledgeable and fun, and fully aware of exactly what he is. He isn’t in this for the glory. He’s a smart kid, but he isn’t obnoxious. Barry is a good kid with a good heart, which is why the mid episode idea of breaking his father out of prison made no sense. It was actually, borderline ludicrous even for what little we know about Barry so far. It wasn’t as though his father was in some sudden danger, he just thought he saw an opening and wanted to go for it. 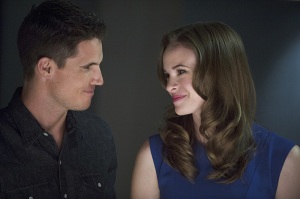 It seems that The Flash is truly gong after Arrow”s affection for Flashbacks. Thankfully, at least they are taking a different approach with these flashbacks as they are not tying them to Barry, but to what the plot dictates. In this case, the flashbacks actually work well as they give us an opportunity to flesh out the specifics of what happened on the night the particle accelerator went haywire. It also gave us a look at the relationship between Caitlin and her fiancee Ronnie. It was nice seeing her a bit warmer, but also acknowledging that she can come off a bit cold. No, Caitlin isn’t some cuddly character that you love, but you love her because she feels like a real character. I’m enjoying Caitlin and I’m hoping to learn more and come to enjoy her in the future. Ronnie certainly was a striking addition. Robbie Amell is shining in the role already.

Much like many of Arrow’s villains, these villains on this show are having a bad case underdevelopment. Each of the villains are popping up, causing trouble, and disappearing into the background. This week the villain was just that. A punch-out character that had some color by numbers traits. We need to see more from these villains. Giving them motivations that aren’t just dumped on at the end of the episode or glanced over. Otherwise they feel irrelevant. The more irrelevant these villains seem the more impotent they become as we know they won’t be a threat to our characters. That can go two ways, either the villains become a point where you can get a sudden surprise or they become dull.

Barry is adapting well to the crime stopping persona. He even took care of an entire situation within moments as Iris was on a call. He is able to rise tot he occasion time and time again. He is willing to make the jump and risk his life to help those he cares about. He’s overly willing and it fits his character. I can’t wait to see a situation in which we have to question what exactly.

We also learned more about Harrison Wells. Simple deduction let us know that before Barry was struck Harrison already knew what he would become. What we didn’t know was that he had cameras were Barry spent all his time. Be sure to check my Harrison Wells theory for updates.