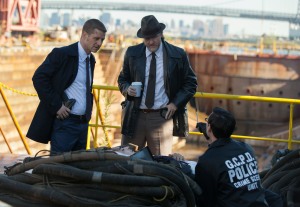 We’re back to case of the week this time with a man fighting for his boss who watched him through the cameras. This one was quite as elaborate and entertaining, but there was a lot of good introductions and information. Through this episode we were introduced for Sionis. Sionis is having is employees vying for positions literally fight for the positions. Sure they weren’t necessarily supposed to kill each other, but it became clear that it wasn’t a first time thing.

Thing’s did get exponentially more interesting when Jim found himself in the middle of an ultra intense fight sponsored by Sinois. Four employees tasked to take down Jim to get their positions and get a million dollar signing bonus. Everyone in the company seemed to be in on it as Sionis had a full viewing party. We really got to see Jim go in and show what he is capable of. 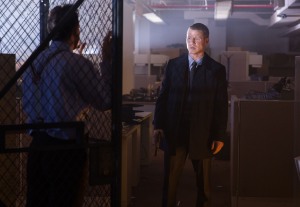 More importantly, we got to see the fall out and interdepartmental relationships shifting after they all fled to leave Jim alone with Zsasz. When Jim needed them, they turned tail and that has left Jim unwilling to trust them. Bullock even admitted that it was a dick move but expected from them. Bullock is still a bit of a jerk, but you can really see them coming together as a team with Bullock in the middle. You can start to see a shift in the GCPD even if it is only a little, but people are respecting Gordon even if they don’t like him. Bullock and Essen.

Just because a deal was struck between the Falcone and Maroni camp doesn’t mean everyone is taking it well. Namely Fish who is so ready to see Cobblepot burn that she stabbed him with her gift and licked away his blood. Maybe it was just me, but when she did that I kind of wished she would have contracted a bloodborn disease so I wouldn’t have to see her anymore.

I don’t really feel sympathetic to Barbara’s emotional troubles at the moment. This is largely because she’s upset that she doesn’t think Jim can protect her. She is afraid because of the memory of Zsasz, yet it was her who came back after Jim tried to protect her. He tried to make sure she was safe, but she walked into that trouble of her own accord against Jim’s will. No. I don’t feel bad for Barbara and I don’t particularly enjoy her snipes at Jim either. If the writer’s are intentionally trying to make Barbara unlikeable thus leading way to Jim’s affair, they are doing a great job. 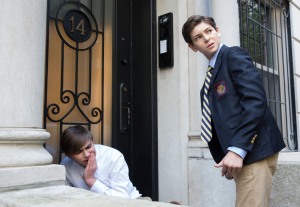 Completely unrelated to the major plot, we did finally get some truly interesting Bruce developments. It’s been weeks, even months, but Bruce is finally getting back to school. From the looks of it, Bruce never got aong very well with the other kids before his parent’s death. Now that they are gone the kids have a target to pick on. It was nice seeing Bruce flounder in front of the bullies only for him to lash out and strike the very same bully when he spoke badly of his mother. But it was a weak slap and Alfred wasn’t going to let that stand. Hell, he had Bruce go to the kid’s home and give him a couple proper punches before congratulating Bruce and telling the bully off himself. Now Bruce has his combat teacher.