A large part of the episode was spent with Skye and Coulson finally getting deep into the mystery of what is going on with Coulson and the pattern. After Skye’s revelation that it just may be a map, they weren’t getting very far diguring it out. The best they could do was to continue to search and keep an eye out for anyone else. Of course because it became convenient, we got another SHIELD agent who was making these drawings. The end of the episode gave us the satisfaction of finding out what the pattern was, but not before we learned a lot more about the GH program. 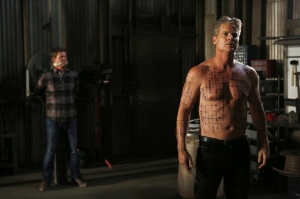 We learned that the GH had very different effects on people. There were 6 patients who were submitted for treatment. Each on was on the verge of death and this was their hope. For a time it looked like it worked. They were going to be released, until they started showing symptoms. The same symptoms as Coulson, drawing the pattern. Except most took it far worse, driving them insane. All except one, the same man we glimpsed at the end of the last episode. The fact that so many people were submitted to this testing, SHIELD agents at that, it’s hard to believe that it was so well hidden away.

What was really interesting about the whole plot was that despite getting people on the team to help them out like Mac and Jemma, he didn’t actually let them in on what exactly was going on. However, when you have people as intelligent as the people on Coulson’s team it’s not surprising that they figured things out. The team knows what is going on, they just don’t know all of the details. That’s what ultimately hindered them in the long run.

Meanwhile, May and a small team are working to apprehend Ward again. he’s a dangerous man and it’s strange to see how easily he can lie. More importantly we see how sharp he is that he’s able to notice Bobbi is working for Coulson. However, May was thinking ahead and had Hunter already in place. That doesn’t mean she had her opportunity, just an eye on the prize. Ward is too thrifty to be caught so easily. One of the most fun things about the episode was the way Ward kept duping and playing the team.

The only thing that really drew the episode back was the lack of focus. we had to completely separate plot lines running simultaneously and they didn’t mesh together well. They didn’t build to a similar goal. They didn’t have parallels. There were no thematic similarities. Ultimately it made the episode feel disjointed. Considering how little of the episode was actually spent on the pursuit of Ward this week. He’s still out there and he’s out to bring hell to Coulson’s team, his brother, and who knows who else. Episodes like this really get to me because they are frustrating, but also bring us to conclusions that we need and want.