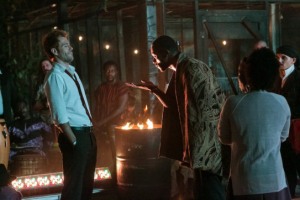 This week really worked on building characters outside of John. Well, just Zed, but it was a welcome change. Heck, even the show decided to acknowledge that John didn’t really know her. Sure, she was following him around, but he knew nothing. She is good at playing people which is interesting. Unfortunately, much of Zed’s character development was done away from John. We’d seen clues that Zed’s life was somewhat complicated before. The detective introduced this week confirmed that with the fact that Zed isn’t her name.

This episode focused on the legend of Kuchisake-onna. In case you don’t know about this urban legend, it’s ultimately about a beautiful woman who is horribly maimed. The maiming is over her face, forcing her to wear a surgical mask. Some renditions mention of how after her face is mutilated she is mocked. No longer beautiful, she takes her life. There are some alternate versions on how she dies, but the result is always the same, she dies. However in the afterlife she becomes a vengeful spirit. Those she encounters are posed with a Catch 22 after seeing her destroyed face under the surgical mask. Those who say she is now hideous are killed for saying that. While those who say she is beautiful, are attacked and killed to look just like her.

The episode took this myth and ran with it. Masaki was a model until oe of her model coworkers grew jealous of Masaki’s sudden popularity. She slashed her and now Masaki is killing on the streets. Heck, she even attacked Chas. However, Masaki wasn’t the only ghost killing people. There were a number of ghosts including a hitch hiker. Zed worked with him, trying to calm his spirit.

Papa Midnite took to the screen again. i really enjoy him as an antagonist. He’s doing some real strange things, but even he realizes that things are not right. Some of the things he does are dangerous. When a man died a woman came to him to speak to her dead husband. Papa Midnite only meant to allow her to talk to him. Instead he came back from the dead and was sapping the life from his wife. that was enough for Papa Midnite to admit that things weren’t right with spirits and worked with John Constantine. The least he could do considering it was Papa Legba’s work that was inadvertently bringing thee spirits back.

Now let’s take a moment to talk about Papa Midnite. He is a fascinating character. He’s firmly entrenched with Voodoo and believes firmly in the loa. They come when he needs their help. Papa Midnite himself poses an interesting character as he is not good, but he isn’t actually bad either. He operates in this middle ground that bests suits him at the moment. Sometimes that means trying to help those who need it, other times he acts out of is own need. Despite his limited screen time, he’s definitely the most compelling character outside of John