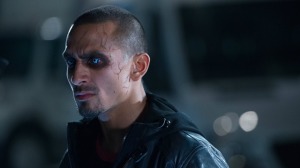 This week opened with a flashback to the night of the explosion. It was interesting seeing the teenagers panic, which you meant they were certain to figure out. With an opening like that it wasn’t surprising that you would see them turn up again. He like many villains so far on this show came with his own sob story. His however was one more of circumstance. After gaining his power he accidentally killed his two friends that were there with him. Those who know the comics would know him as Blackout. Makes sense because his power can cause blackouts. Get it, Cisco is so good at this.

Barry was particularly cheeky this week as he flitted about enjoying his abilities. Whether it was delivering coffee or showing up a petty thief who tried to hold him up. He was thoroughly enjoying his speed, which is why of course he lost his speed. When an electrical meta human needed a charge, Barry got caught in the blast. While he didn’t die like the first man that got in the way, all of his energy was drained and he couldn’t run. 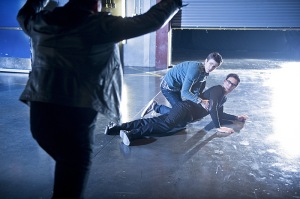 What was interesting was we saw a bit more about Harrison Wells’ back room. The computer in there was more than just a simple computer, but a database that updates with future information. When Barry’s powers were zapped away, all references of The Flash were sapped away.

The material with Wells this week ran deep. Wells is s caught up with what Barry has became that he considers The Flash his greatest creation. That meant he was willing to protect Barry at all costs. That means recruiting Tony. Yes, Tony, Barry’s childhood bully who saw Barry’s true identity at the end of the episode last week. Wells ordered Tony to kill the electricity sapper at any cost and if he did so he could go free. It was quite tragic and a nice show of Barry’s opposite character. While Wells would send Tony out to die if necessary. Barry had a moment and felt remorse when Tony died in front of him. Barry doesn’t see thing like Wells who will sacrifice anyone necessary to reach his goal. Barry was truly upset that Tony died. it was a nice moment for Tony who told Barry to get out of there before he died.

There was a little cameo from the Clock King as well who was being brought in Central City PD. It was a fun continuity piece to finally see one of the villains from Arrow make an appearance on The Flash. The Clock King’s attempt to take the station hostage happened at just the right time, during a black out caused by Blackout. Generally I would have thought that his inclusion with two villains in one episode was a bit much. It somehow worked though. The timing was just right. (Pun intended) That said, the Clock King’s appearance brought an interesting element to this show.

The Clock King brought a really dark element to the show that is normal for Arrow, but not for The Flash. The Flash has thus far maintained a very light hearted tone even in it’s darker moments. This episode changed that entirety. Between Barry struggling with the loss of his powers and the hostage situation, the entire show felt out of sync with the show thus far.