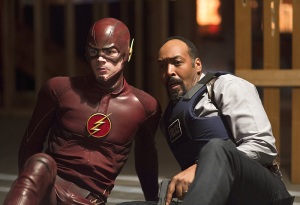 Eddie wants The Flash arrested for all of his mysterious appearances at crime scenes as of late. He’s now dead seat on making sure that the Flash is stopped at all costs. To him it’s more important than just a hero bouncing about. It’s an unauthorized vigilante, blitzing about the city who’s intentions are entirely unclear. In many ways, Barry is very much in the same position as Oliver was until this season. The main difference is that Barry has people in positions of relative power that can help him out when necessary whether it is heling cover his tracks or providing resources.

Barry meeting up with team Arrow was fun. Diggle’s total surprise that Barry was the scarlet speedster was amusing. First the initial shock of seeing his speed made his eyes bug. Then he was so caught up that he couldn’t get over his cousin only developing a stutter after being struck by lightning. Then when Barry finally left he continued to freak out. Heck, even later he was still dwelling on the fact that Barry was so fast and it was freaky.

Arrow team ended up in Central City mainly because of the end of “Draw Back Your Bow” in which we saw Captain Boomerang kill someone in Starling. While I’m not entirely sure how they tracked the killings in Starling City to Central City (forgive me if I missed that explanation), but being in Central City gave them access to STAR Labs. The one place that could effectively analyze the boomerang so they could get a lead on who it actually was.

There was instantly a rift between team Arrow and Barry’s mentors. For one Joe and Harrison both see Oliver as a danger. They don’t trust his track record and reasonably so. As much as Oliver attempts to take the high ground now, he has a long trail of bad guys dead in his trail. it isn’t exactly the most exemplary record. Add in the string of disastrous events in Starling City since his rise to prominence and their worries are actually reasonable. Wanting Barry to stay away and to get Arrow out of Central City is really the only expected route for those characters to go after. It wasn’t as though Oliver really did anything to prove either of them wrong when he shot a man in a leg for information and continued to practice his way of justice and information getting in Central City.

What was interesting about much of Oliver’s interactions with Barry were that of a mentor. Oliver was doing his best to help train Barry and make him more effective. Sure, his mocking of Barry and his team giving all his villains was typical spoilsport Oliver. However, Oliver made multiple good points. Barry is haphazard when he jumps into a a location. Oliver wants him to be more observant. 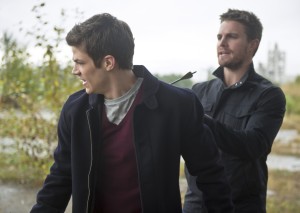 Let’s not forget that Barry did have his own unique villain this week in the form of Prism. A man that is capable of forcing people to feel emotions by making them see colors. In this case, red made them feel rage. And when Barry decided to go up against Prism without the help of Arrow he was whammied with the rage look Prism had been spreading at his crime scenes. However, Barry didn’t properly exhibit his symptoms. Instead, they slowly emerged bit by bit as Barry snapped at people. With every interaction he became more vehement. All of it culminated in Barry actually attacking Eddie for his desire to create a task force against The Flash.

In order to stop Barry before he got too out of control, they needed help. Thankfully for Barry, Harrison figured out on his own that the Arrow was actually Oliver Queen. Sure his identity was no exposed to another hero team, but Oliver was able to step in and help Barry. All while this happened Diggle and Cisco were taking bets on who would win, skill or speed. Neither of them real won officially, but Oliver did get the drop on Barry in a way that made it so they were able to break the rage from Barry before he could cause any real damage to Oliver. That is a major win for Oliver. It won over Harrison and Joe so they actually liked him. 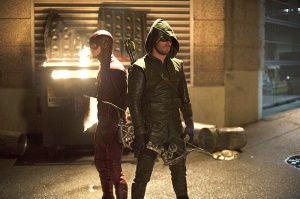 We’ve been seeing over the past couple of weeks that Caitlin has really taken to Barry. She isn’t overly affectionate, but she is truly interested. She thinks of Oliver almost as a surrogate person to care for. It will be interesting to see over the course of the season to see how their relationship evolves especially now that Ronnie is on his way to being reintroduced. We actually got a glimpse of him at the end of the episode. Something I’m sure we’ll face on the next episode.

What this episode did really well where it could have massively failed was making it feel like a continuation. Instead, we are delivered a full episode that crosses over. Yes, threads are opened, but there is a full arc played out in this one episode.

2 thoughts on “The Flash – “Flash vs Arrow” Review”