Jimmy has gone from one of my favorite characters in the season, to just a pathetic excuse. He’s devolved into a character I no longer like. On a show like this, it’s nice to at least like one of the characters among all the horrible people and deeds on the show. However, the devolution of Jimmy is heartbreaking. It’s understandable that he hits a low after his mother’s death. Heck, it even makes sense that he flocks to Ima, a woman who had the closest physical appearance to his mother, though with a lot more. Jimmy was spiraling out of control and falling into the bottle. Watching him all so far was still painful though because you didn’t want to see him hit such a place. And he truly went nasty with his downward fall as he stayed drunk, cheated on Maggie, and proceeded to bounce from woman to woman all while in a drunk stupor. His spiral was topped off by being arrested for a crime he didn’t commit. 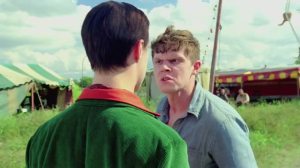 Dandy offered up the second moment of true horror that chilled me to my bone. Watching Dandy kill the Avon lady was not surprising, nor was the view of her slaughtered body on his floor. He said his mother needed a friend, but I didn’t know he was going to go to the place where he did. The image of how he stitched the Avon lady and his mother together was a clear indication of his perversion and obsession with Bette and Dot. There was no hiding it, and even Dandy seemed aware of what he had done. However, with his mother now out of the picture, there is nothing holding Dandy back. he’s taken the step into complete degradation. He’s dangerous and volatile. He’s to the point where he is killing people any chance that he can possibly get. He lives on his own system. He is a different man now that nothing is holding him back. He literally thinks of himself as a god on Earth. The problem is that he is getting indications that he does have as much power as he thinks. Especially when he convinces the detective with Regina to kill her and he does. Dandy left a long trail of bodies this episode from beginning to end and it was very satisfying to watch his deranged behavior as he provides the horror in this season.

Elsa was back to manipulating Bette and Dot as she swooped in taking them from their motel hideaway with the promise that Bette and Dot would get their surgery. However, they were brought to a garage with a plastic table for them to be operated on. Bette is still not for the surgery, but Dot longs to be separated. She believes foolishly, given her character, that she can be free. Bette showed up this episode, proving that she isn’t quite as foolish and ignorant as she may seem. She however is willing to let her sister get what she wants by going through the surgery.