This post will be highly spoilerific with major spoilers from last night’s episode of Arrow, “The Climb” as it presented an event with major consequences for Starling City.

On last night’s episode of Arrow, Oliver was forced into a position where he had to save Thea’s life from the League of Assassin’s after her father Malcolm Merlyn set her up. Oliver had three options, turn himself in as Sarah’s killer, give up his sister to the League, or let innocents in Starling City be killed in bunches until the real killer was routed out. We’ve seen enough of Oliver to know that he will do anything to protect his sister, so he went with option one and opted to challenge Ra’s al Ghul in an attempt to save his life and clear the debt over Thea and Malcolm’s head. However, for as skilled as Oliver is, he’s no match for Ra’s al Ghul. By the end of their fight, Oliver was stabbed twice and kicked off a mountain. Oliver Queen was dead.

What is the city without Oliver Queen? 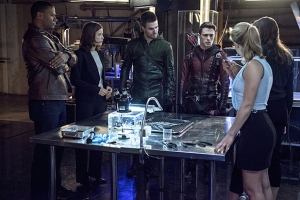 Oliver has been in the city trying to keep it clean for two an a half years at this point. He’s transformed from a dangerous man out for vengeance working with a list to a man who is out to protect the city. More importantly he’s no longer a killer. Starling City is dirty and grimy. As was mentioned in “The Brave and the Bold” Starling City is filled with down to Earth criminals, who make the metahumans of Central City feel almost like jokes. The people breezing through Starling are calling for destruction, they literally want to see the city burn and have almost succeeded twice. Starling is dangerous and without Oliver as the Arrow, things fall back to the rest. It falls to Arsenal, who’s yet to go out on a mission entirely on his won. It falls to Laurel, who is still in the early stages of picking up the Black Canary mantle. And it falls to Ray, who is only just now ready to take his ATOM exosuit out into the world to help the City. 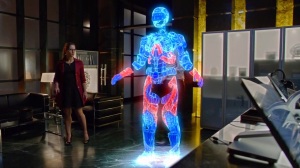 Those are three people with their hearts in the right place, but three people who haven’t gone through the trials and tribulations that Oliver had to get him where he was. Can they handle the city for the time? I would bet on yes, as long as the threats remain small. However, I don’t see them being skilled and prepared enough to barge into a larger situation without the keen eye of guidance that Oliver provides. We will however, likely see how that plays out for a short time. Besides I would love to see that exosuit in action. As well as an opportunity to grow some of the other characters that are often left in the wayside. Roy really needs some fleshing out and as Arsenal he’s more than eager to help out. 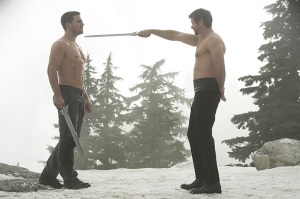 Oliver died at the hands of Ra’s. Yes, we’ve seen proof that there are metahumans and there are things in the world that we don’t quite understand. Starling City has always been a down to earth locale. Ra’s presents a new element though. Those who know of Ra’s al Ghul know that he is traditionally one of the villains pitted against Batman. However, with Batman seemingly out of the picture, or at the very least unmentioned, Ra’s seems to have fallen into Oliver’s wheelhouse. Ra’s is long known as the man who uses the Lazarus pits. As the name suggests the pits bring life. Those at death’s door can use the pits and restore themselves. Which is why Ra’s can look as young as he does despite having not been challenged at all in 67 years by his count. The fight between Oliver and Ra’s was dramatic. We knew it would be a fight to the death and even Oliver seemed to have the feeling that he would not lose. Heck, that sentiment was passed to the audience when Ra’s chose to fight with no weapon but his bare hands, opting to take Oliver’s when he was done with them. We have to make the assumption that Oliver is dead considering he had a sword through vital organs and then kicked off a cliff. However, there is a change he may be barely clinging to life 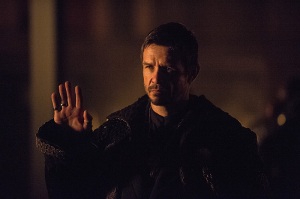 As I already mentioned the Lazarus pits, we have to consider the likelihood and the circumstances that Oliver will no doubt be placed. On a series called Arrow, it is highly unlikely that they are going to unceremoniously kill off the title character. It isn’t as though the show created an alternate version of the Arrow. Oliver Queen is Arrow. He is the man and he is the heart of the show. He keeps things together. However, we have reached a point in the show, where something traumatic like this could happen. Oliver can be taken out of the picture for a time and we’ve grown with the rest of the characters enough to desire to see their struggle. That said, Oliver will not be taken out of the picture permanently, not when a solution to his little death problem is right there. The real question is what are the conditions that Oliver will be allowed to use the Lazarus pits? Who will over the Lazarus pit to Oliver? And most importantly, how will the Lazarus pit effect Oliver’s character? There are so many things that could potentially go wrong. There are so many unsavory positions Oliver may now be placed in. He could easily have no choice, saved by Maseo and unwillingly brought into the fold of the League of Assassins. The pits could drive Oliver mad. Most likely, Oliver will be put in a position where he must no answer to a higher power that could jeopardize his goals back in Starling.

So what exactly am I saying with all of this at the end of the day. Keep in mind these are only my thoughts on what will happen. Laurel, Roy, and Ray will step up for a time to help with crime in Starling City as they grieve, before Oliver can return. Oliver will be taken into a Lazarus pit, likely by Maseo, and will then be roped into a situation that ties him to the will of Ra’s al Ghul. This will likely both hinder and benefit him as he leads into some major event for the finale. (However, I wouldn’t be surprised if his ties to Ra’s may not be settled until sometime in the fourth season instead making the third season an uneasy alliance to once again take down Malcolm Merlyn).

3 thoughts on “The State of Oliver Queen”