Jim isn’t handling his job at Arkham Asylum very well as inmates keep getting into fights and causing a stir on his watch. It’s already to the point where Jim’s punishment job may get even worse. Inside the asylum, Jim Gordon still can’t shake his detective ways. However, it really is more of an indication of the shows’ inability and lack of desire to try to be more than just a procedural. They are in the asylum and logically there would be a very different feel to the show. That isn’t the case though. Now the show just feels like we are locked in to a small subsect of all of Gotham. The asylum is also portrayed as not just a dangerous place, but one run with total incompetence. The entire time they didn’t even realize that one of the inmates was masquerading as a nurse, talking to all the characters. That is a terrible oversight and one that makes me question the intelligence of everyone involved, including Jim.

Fish is still seeking the top, by making allies and playing others. Everyone is playing each other and that is part of the fun in asylum. People being toyed with and manipulated is what makes the show interesting. Fish’s grab for control is becoming more brazen as the season jumps into the second half. 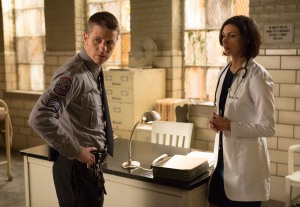 This week we saw the introduction of Leslie Thompkins. She’s young and spunky. She has more flavor in her character than half of the people introduced on the show. Unfortunately, she’s still a bit blank. What stands out though is the chemistry between Jim and Leslie. There is something there instantly. A something that was sorely lacking between Jim and Barbara. For that reason alone, it’d be interesting to see their relationship grow since they are working int he same place.

Speaking of Barbara, she got a bit more screen time this week. She’s a hollow shell, but she delivered her strongest performance to date. The scenes she shares with Renee simply have more passion than those with Jim. She actually looks somewhat upset. Unfortunately, her first real show of emotion still left one irritated. Barbara as a character is one of the worst things about the show, dragging it down with the writing and the performance. Seriously, Barbara is so dumb she couldn’t tell that a young girl answered his phone, getting so angry she threw her phone. Seriously?

As for performances, I was particularly blown away. Not in a good way. While, some of the characters have settled into their roles in wonderful ways, there are still far too many characters that are off the wall. Whether that is because of bad writing or bad delivery, the show leaves you with a bad taste in your mouth. Something isn’t right in those hammy performances. Half-way through the season, the show can’t quite decide if it wants to be serious or play up its comic nature.