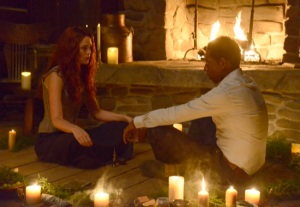 Not only is Frank alive again, but he was also exonerated. He is free and he can see his family again. However, the thoughts of what was possibly happening with Frank made his ex wife a bit weary. Thankfully, the episode didn’t dance around this, but had her confront him. She laid out her concerns clearly. Though, I have to wonder why they were in bed together. Before he was arrested, they had been divorced, so it’s a very drastic jump. Especially considering he is an unknown factor currently. In one of those rare moments, it brought Katrina into the fold in a useful way. She confirmed that the Horseman of Death no longer had a hold on him, but whatever brought him back didn’t make him hole as Frank realized.

It turns out that Hawley was raised by a vatala. She attacked Hawley, but he could care less. She may have raised him, but she seems to hate him. However, he has a weak spot for her and agrees to help her stop the vatala mark that is ruling over her. Unfortunately, rather than really give us a chance to further understand and bond with Hawley, we just saw the kind of person who raised him. The show didn’t seem to want Hawley to shine. While he worked to save his new friends, he still fell back into the fold with his godmother. The betrayal of his godmother was not surprising based on her past and current actions. 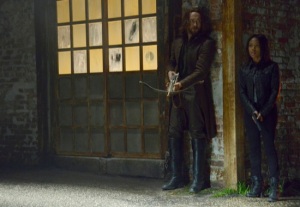 The show isn’t ignoring the fact that Abbie and Crane not being together is bizarre. They clearly aren’t working through their issues like they need to. They are working separately. That means that we aren’t getting as much of what makes this show so great. Abbie and Crane make the show tick. Ultimately their separation has affected how the operate in a negative manner. If they were able to communicate effectively, they wouldn’t have separated at a crucial moment during a pursuit. It did leave them locked together in a room where we got to see them working together again.

One Crane an Abbie had started to sort out some of their issues the episode really came into it’s own and just in time considering Hawley was on the verge of becoming a vatala himself. The two were not only able to find a way out of the literal cell made by Knox (as in Fort Knox). They also figured out exactly how to take out vatala without having the time to consult their texts. Together the proceeded t take out all the various vatala they encountered in their pursuit to free Hawley. it felt fitting that it was Hawley who went for the final blow against his godmother. The departure of Hawley to hunt down his godmother is noble of

Can I please have Crane and Abbie singing “Proud Mary” burned forever in my head for when I need a pick me up on those bad days.