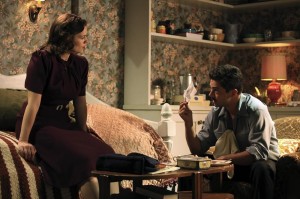 Howard Stark mad his reappearance on Agent Carter. His return is risky, but more than welcome for the audience. There is a charm that Dominic Cooper exudes in this role and seeing him more is always welcome. The fact that he snuck into one of the young ladies rooms was positively hilarious and fitting for his character. That said, Stark didn’t play much of an effective role. Stark is a genius. We already know this. His genius is hidden behind the playboy, but he makes things that are beyond his time. Even the guys in the SSR labs have difficulty nailing down Stark’s inventions.

It isn’t until Stark declares that Peggy needs to steal back one of his inventions that things get messy. One of his inventions can bring New York to a halt if Peggy doesn’t get the real one. It was determined to be dangerous. However, Peggy saw through Jarvis’s twitchy nature, realizing that something was up. Now, I’m not going to say that Jarvis was particularly convincing in such a way that Peggy wouldn’t recognize that something was up. It wasn’t actually a dangerous device, but it did contain a vial of Steve Rogers blood. This only pitted Peggy against Howard. 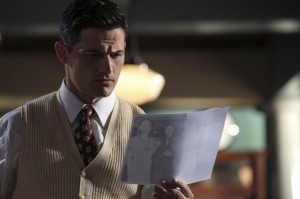 Dooley is on a mission to take down Stark at all costs. That means he’s willing to go to Germany to speak to a Nazi to get more information. He really is willing to go to almost any lengths to get Stark. While in Germany he learned that a supposed battle between Russians and Germans was never actually fought. I’ve mentioned previously that I really enjoy that the SSR is actually making positive strides to solving this. Many shows would like to toy with us and essentially paint the pursing agents be borderline incompetent. The SSR here is depicted as a team with competent members who deserve their job.This is further proven by Sousa’s desire to solve Kaminski’s murder. While everyone went into overdrive with Stark, Sousa went to get prints off the public phone Jarvis called in the tip from and question some locals. Sousa may be handicapped, but he proved that he still kicks butt.

There is a lot of tension between the men in the SSR. Sousa’s witness was highly disagreeable. Sousa couldn’t understand and get on his level in order to get the information that he needed. Despite Thompson thinking Sousa was wasting his time with the witness, he still did what was needed to get the information from him. Sousa tried to use stories and sympathy. Thompson spoke to the witness through his stomach and almost instantly got results. 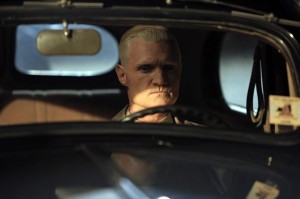 This episode also confirmed that Peggy’s supposedly innocent new neighbor is in fact a vicious spy. Her alignment is not clear, but she is certainly capable as she was able to take out the German with ease over and automatic pistol.

There was also a nice little Stan Lee cameo that was a nice touch to the show.