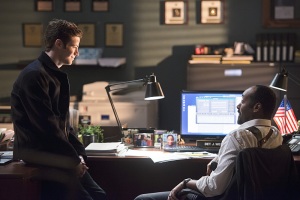 The Flash has proven to be highly successful so far in it’s short run. Part of the reason so many people are no doubt clinging to it is because of how much fun this show actually is. Whether it is taking down the Royal Flush on their bikes or using frequencies to break glass with Joe, the characters still know how to have fun. Even Barry’s remorse over not taking more language in high school was humorous.

During the midseason finale, we learned that Harrison Wells was likely Reverse Flash. All signs pointed to him, but because of the way TV works one could still hold some sort of understanding that it may not actually be the truth. Wells has been shrouded in mystery the entire time. We’ve seen glimpses of the past and heard him espouse about his past, but there’s still a lot of uncertainty surrounding him. This week confirmed what we somewhat knew. Harrison wells is in fact a speedster as he ran out of the way of the falling glass to safety. We did see chinks in that armor. It seems that his use of the wheelchair isn’t entirely a ruse. He still struggles with the ability to walk and his bouts of walking are more rare occurrences than an all the time thing. Thus we get a new mystery to add to his many, as to what extent he can use his abilities. Why does he need the tachyon device. What really affected him in this way to leave him so broken that he would go back in time to teach Barry in order to power up the Speed Force. 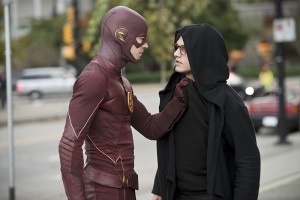 Everything about Wells is questionable. He’s a character who has little truth to him. Instead, he has the lives of everyone who was hurt in the particle blast. He knew that there was a chance that it would explode. Considering that he knew the particle blast gave Barry his powers, he’s even more at blame. The fact that Caitlin and Cisco were so upset over learning just that he knew there was a chance. It will be interesting to see how they react when they learn that Wells didn’t just know there was a chance, but knew that it was a definite. It’s good to know that Joe is looking in to Wells for answers after realizing the lies he told weren’t adding up.

Unlike other villains that have made their way on the show, the Pied Piper felt like a more whole character. He felt less like a villain of the week and more like a real character. Hartley was a challenging person. Even in his past, he was a dick. Her was snobby and pretentious. He was bossy and brought new meaning to being a prick.Thus when the finger pointed at Hartley for being the guy wrecking the city and attacking people and building with sonic gloves he’s approached. Hartley has information about Wells that no one else knows. Hartley was insanely smart, he knew how to play Wells and the team. It is good seeing a villain that was above average in the smarts department. Hartley manipulated and played with the team’s tactics to his advantage. 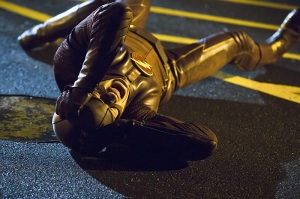 I have to admit that I didn’t care much for Iris’s little plot this week. She was brought on to work at the paper she idolized. it was a thrill for her, but she quickly realized she was only brought in because of her connection to The Flash. This thoroughly ruffled her. While her mentor was a complete asshole and her boss was indifferent to her entire existence, I didn’t really care about any of that story line. I have no hate for the Iris character. However, it was frustrating seeing time devoted to this storyline in an episode that had so much other compelling content.