One of the most annoying things going on so far in this show is the lack of support from NBC. At this point, we know that Constantine is unlikely to return for another season after it’s poor ratings. Even still airing the most recent episodes all out of order has made it confusion for the continuity of the show. It can be very difficult to effectively critique a show when the character’s situations are shifting and you don’t know how they got there. There’s also a strong possibility that it’s just very loose writing that is making the episodes not feel cohesive, but disjointed.

Two week’s ago Zed dropped into a coma. She was really hurt. However, it seems that either she somehow got well or there are episodes and information missing. That said now she’s back in the hospital suffering from seizures again. Zed has a brain tumor. It causes her to have her seizures, as well as her visions. Now it seems that she may not be quite so preternaturally charge, but the tumor effecting her consciousness. It doesn’t make complete sense as we saw her visions and what happened. There was definitely something going on with her, but the tumor is no doubt a problem. By the end she came to accept that her visions were a gift from God and the tumor was the price. It’s also nice that Manny is now making himself seen to her as well. 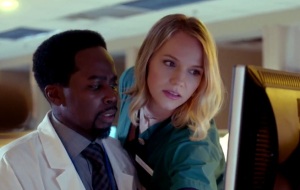 One of the interesting twists in the episode was the fact that John got sick of Manny flapping in and out so he trapped him on Earth as a mortal. The change was something that was entertaining as he threw up over the body. Him getting flustered over the nurse that was flirting with him was also funny. He was entirely out of his element on pretty much every level and it worked. Harold Perrineau seemed to have fun with it and it was one of the memorable aspects of the episode.

John chose to throw himself into his work rather than confront and deal with what was going on with Zed. He truly only focused on what was going in that situation as there seemed to be some force that was trying to break out. Unfortunately, this episode’s villain, much like many other episodes, the problem laid with a poor understanding of the opponent until very late in the game. it’s hard to invest in solving a problem when the extent of the potential damage is unclear. The other problem is lack of motivation. When so many of John’s opponents ultimately cause issues it’s for the sake of causing issues. All of it centered around the black diamond that was warping and altering a good doctor to do not such admirable things to his patients. The story felt weak and contrived to give John something, anything to do that kept them in the hospital as Zed dealt with her medical issues.