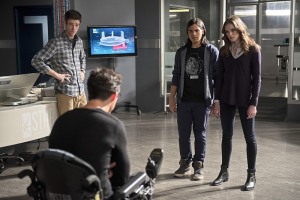 ust as Barry is trying to get to know Linda Park, his date was surprisingly interrupted multiple times. Each time Barry was able to solve the minor issues and rush back before he was missed. It really goes to show how well Barry has adjusted to this superhero life. He’s in he’s out he’s helping and he’s still managing to go a date. The whole date went well enough to merit a second. That said, the discussion about Barry “going too fast” was kind of hilarious. This proved that it may be a problem as just getting a bit excited while making out made him vibrate. Before this relationship blossoms it’s already beginning to implode. For now Barry has won her over. 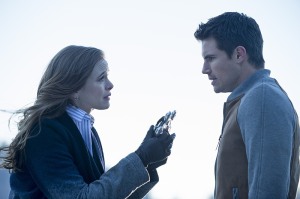 The focus of the episode was Ronnie Raymond and his struggles with being part of Victor Stein. Ronnie may have his body, but he seems to have adopted the mind of Stein, which poses an issue for both of them as they are struggling for dominance. The problem is that they don’t have strength to properly control their ability. he’s lashing out and is proving to be dangerous. It took recruiting Stein’s wife to convince Firestorm to come in to run tests to try to get him better. He finally came in and even got cleaned up (I’m glad Robbie Amell is out of the wig and dirty make up). However, the tests reveal that his two selves are warring with each other to the point that Wells fears he will go nuclear. What was surprising was that Wells sacrificed his Tachyon device to create a fission device to separate Ronnie and Stein. There was still a massive nuclear blast that alerted the military so it isn’t clear that he is dead. It does mean that the government is out to get Firestorm. 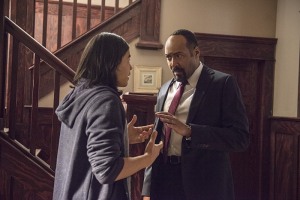 One of the things that I’ve really been enjoying recently is Cisco going off on his own adventures. In this case, he was helping Joe out to try to figure out what was going on. Letting Cisco do things on his own is helping establish him as more than just a funny sidekick, but someone who may be able to be more, whatever that may be. Their endeavor was pretty interesting as they revisited the scene were Barry’s mother died. Cisco is so good at his job that he found a way to potential find clues on a fifteen year old crime through a mirror that was still there. Heck, they were even able to find blood that was somehow missed at the scene. It wasn’t until Joe asked Cisco to run the blood against Wells’ that Cisco got flustered and entered a state of denial. Whether Wells is the culprit or not, Cisco’s unwillingness to run the test displays his uncertainty in Wells’ innocence. If he truly believed that Wells was completely innocent, he would have run that test just to prove Joe wrong. The test revealed that it was Barry’s blood not Wells. However, it wasn’t from a young Barry. It confirms that The Flash will be going the route of time travel.