The future that Cole was jumped back to was entirely different from when he left. It was interesting to see his vision vacillate between what the future was to what it is now. The future now is a state in which Cole never went back in time and the West Seven were controlling the facility. A future where Ramse was actually the one in charge. Returning to this future was actually really interesting. it was obvious that Cassie’s death at the hand of the 12 monkeys was the point of major change. Unfortunately, it didn’t change anything for the better, in fact the disease was released sooner. This major change to the future was something that we really felt this time. we’ve seen the future enough to know what is normal and what isn’t. That made this change radical and actually made sense to the audience.

Cole’s goal was simple, save Cassie. He went back further in time so he could encounter Aaron and convince him to help. This was vital considering Cole was locked up with Cassie thus going himself would cause a paradox. Aaron was the key to getting Cassie out of the Army of the 12 Monkeys custody alive. The various encounters that we saw as they tried to rescue her was fascinating. He needed to get her quick too. The position she was in was not pretty as she was questioned and put through a mental ringer. Through her drugging she learned about the Witness. They now have two leads, Operation Troy and the Witness. 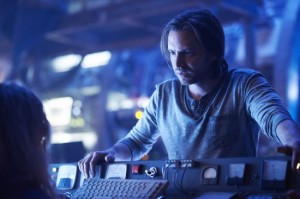 I really enjoyed the dynamic between Cole and Aaron. Both men care about Cassie and want to make sure that she survives. Sure for Cole it is a combination of saving his future and saving a woman he may have real feelings for. Aaron, on the other hand, is in it to try to save the woman he loves. If he hadn’t seen Cassie taken by the men in the event we saw at the end of last episode, he wouldn’t have gone along with Cole’s plan at all. They are very different people. Cole is rash and brutal as we saw him beating a man mercilessly for information. If Aaron hadn’t stepped in Cole likely would have killed him. What was surprising was that Aaron let it go so far. The position he was place in was testing him. Aaron’s reaction to Cole finally jumping back in time once Cassie was safe was priceless. However, it was exactly what he needed to really get on board with what was happening. After this display of reluctant camaraderie, I’d be interested to see the pairing of them on screen some more.