Ra’s is well aware that Oliver Queen is not dead. Heck, he knows it and doesn’t particularly care. This is mainly because he knows that Oliver was not Sarah’s killer. It isn’t until Nyssa finds out and pushes for justice. Clearly, Daddy let Nyssa go especially after Thea called in the league so they could pick up Merlyn.

Thea is so racked with guilt over the knowledge that she was Sarah’s murderer that she went and did exactly what Oliver told her not to. She went to Laurel and told her the truth. To Laurel’s credit and more in line with the stronger person laurel has become, she didn’t crumble over the news. Sure, she got plenty upset, but she wasn’t angry about Thea’s crime instead, she was mad about Thea still working with Merlyn after discovering this truth. She gave Thea a moral question to answer. That forced Thea to contemplate the belief of if she really didn’t have a choice or if she did. It seemed that push was enough to make her or anyone for the first time consider that they could always double cross Merlyn and just let him be caught for his crime. However, this is tv thus forcing the team into a moral crisis allowed for more drama and a bit more story. It was nice that they did finally reach this conclusion.

I reached a point of severe frustration with Oliver. The fact that he would attempt to justify not letting Merlyn be taken by the League made no sense. yes, it made sense that he might try to justify this with the potential guilt of sentencing her father to death. However, it made no sense from a logistical stand point. Merlyn is a seriously messed up man, willing to force his daughter into a crime. Thea is done with him. Why is it so important to to prevent Thea from an action she took of her own free will to save a man who is a murderer with no sympathy for even his own blood. Malcolm is a manipulator. Oliver has this perception of what he thinks Thea can handle. It would be nice if he could allow for her to discover for herself, but he’s forever playing the big brother to the point of walking to his death for a second time for the same cause. Going to Nanda Parbat led him to Ra’s. However, Ra’s didn’t want to kill Oliver. He wanted Oliver to become him.

Diggle got a bit more screen time this episode. Normally that would have been great, but it felt worrying. Thankfully, I was glad for the Diggle time because as the cast has grown, Diggle has been pushed to the side. While all the extra time was mainly so Diggle’s question to Oliver didn’t seem out of left field, I’d take it. 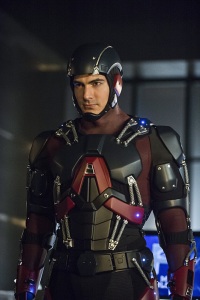 What didn’t make sense however was Laurel going after Merlyn on her own. It doesn’t even begin to make a lick of sense. In this universe, Laurel doesn’t stand a chance against Merlyn even in her wildest dreams.

Ray finally came back into play. Apparently Brick rattled ray enough to the hole himself up and work on his exosuit. He’s driving himself to the brink just so he can get it ready. Which is forcing Felicity to work with him. While I’m glad to get a check in and see the progress he’s made. At this point I’m ready to see the suit in completion and ready to go. This was a step in in the right direction as we saw him in his suit and even launching off. I’m not entirely sure where they are going with this Atom, but it certainly more the Iron Man type. In the mean time, we got some progress on another story line swirling Ray and that is him hooking up with Felicity. I enjoyed that Felicity made the first move. Heck, I even relished the fact that Felicity was taking a step toward her own happiness as Oliver continued to self-punish. That said, that happiness was met without the chemistry one would hope. Ray and Felicity make a good team. Yet, I don’t get the feeling like she had with Oliver and even Barry.