Clarke and Lexa are very different people, yet they are both leaders. I was glad that Clarke finally stood up to Lexa. Clarke is strong, but the reason she is strong is because she derives the will from protecting her people. There are times when she needs to make sacrifices and has proven that she is willing to do it. It breaks her, but what keeps her going is the fact that she doesn’t forget. The losses she suffers are motivators to remind her that she won’t let the same things happen to others. Clarke thrives on her emotions, both good and bad. Lexa has yet to discover the strength of emotions. Instead, she bottles up all of her emotions and keeps people at a distance. To Lexa, people are a weakness.

The trek to the City of Light is proving to be particularly hazardous. First they encountered the thievery. Now they are dealing with landmines. The explosion of people as they stepped on them was particularly brutal as it rained blood and body parts. Despite this, they saw a sign that they could make it there. It is quite demoralizing though considering there are only four of them left. Yet, when they made it across that minefield, they found nothing. The lights reflected of half destroyed receivers. However a drone gave them renewed conviction to continue onward. 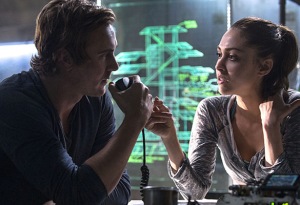 In Mount Weather, the 47 are hidden away. Sure, they are being shuffled around to safety now that Cage is pitting the population against them for what happened on Level 5. Bellamy has more important matters, namely adjusting the levels of the poisonous fog with the help of Raven and Kyle. A not so simple feat when all they have is a radio and Ballamy who doesn’t quite know the tech. Once the fog was neutralized, the grounder army was ready to move.

With war on the horizon, I wasn’t surprised to see some of the characters get a bit carnal. Emotions are high and who knows who could die. It wasn’t so incredibly surprising that Lexa made a move on Clarke. There is a chemistry between the two characters. After everything Clarke had said to Lexa earlier, it wasn’t surprising that some sort of move would occur. It worked in every sense. Especially because Clarke pulled back, simply because she wasn’t ready after the death of Finn and all the other deaths from the village that hang over her head. Considering the amount of flirting and tension that we’ve seen between Raven and Kyle in the past and then furthered this episode, I wasn’t surprised to see her go for it or shut down afterwards. I was a very Raven thing to do.