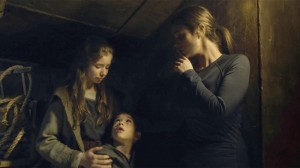 Things are getting heated and dangerous in the Abbey. With the sick hidden, Brother Michael rounds up the healthy to be kept together in the dining hall. To the CDC doctors this seemed like a smart move since the control and care of the sick people was no longer in there hands. The best they could do was to try to prevent others from getting sick. Alan and Kyle just didn’t know that this presented the perfect opportunity for Brother Michael to purge the community that had grown out of his control. The Abbey is no more than a breeding ground for his own personal experimentation and it has now been contaminated. The fact that he was willing to kill everyone including kids was a bit upsetting. The final scene as he urged a young boy to unknowingly drink his poison as others died around them made me want to find a way to kill Brother Michael myself. No doubt there will be some interesting fall out now that there has been a mass murder in the Abbey.

The disease out in the open was rather terrifying. We were brought through this journey with Sarah as she found a pair of children who were fleeing from their infected father. They were scared and seeking anyone to make the fear go away. It wasn’t until their dad broke free that things got dicey as they charged after them. We haven’t seen much of these disease ridden since the first episode. It’s easy to see just how violent these people can get once they are infected, not to mention disgusting.

Speaking of Sarah, she had a lot to go through this episode. The emotional wear she suffered really shown through. She’s in a unique predicament in that she was pregnant with an immortal, but had already come to accept that it was never going to be born. Despite that, it had grown to become a part of her. The fact that her baby was forcibly removed, no where to be seen, she is no going through a trauma that is beyond difficult. A part of her was taken and the raw emotions she portrayed was well done. 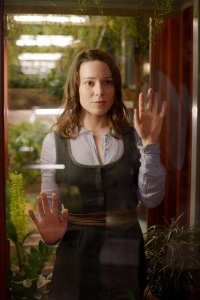 Brother Michael remained creepy as his relationship with his daughters and soon to be with Amy grew more perverse. He seems thrilled by Amy’s rebellion, idolizing her spark. Yet, I’m not sure if it is him wishing to stamp out her personality into something more suitable to his needs, or if he really does want his like her the most. Either way, Amy has made it abundantly clear that she doesn’t wish to become another one of Brother Michael’s childbearers. However, he meets that defiance with the news that he wishes to make her the mother of an entire new generation. He’ll kill of his followers and repopulate the Abbey with Amy. Heck, hes even done it before.

Julia’s talk lead to a reveal regarding the experimentation going on in the Abbey. His splicing isn’t just producing his own children. He is also making the men infertile so he can sire his immortal kid. A useful solution to curb the human population issue. It’s also nice to get a more suitable explanation as to why she was traipsing about the island in the earlier episodes.