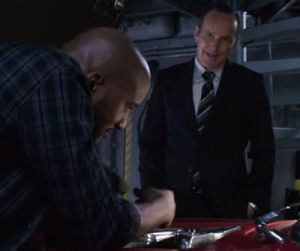 After learning about what Bobbi and Mack are really angling for. It was nice to see that Coulson had the leg up on Mack, realizing that something was up. They were after Fury’s toolbox, but getting out wasn’t quite as easy as they had hoped. With almost everyone on the base turning against them, they were fighting upstream. I wasn’t until they received a bit of help that the tables turned. It was not a reassuring the way they treated people who were supposedly also SHIELD. What the flashback did start to show that Bobbi is someone who questions and isn’t quite sure

We don’t get a whole lot of flashbacks on Agents of SHIELD, but tonight was an exception as we saw what happened during the fall of SHIELD. This time not from our team’s perspective, but from Mack and Bobbi’s point of view. These scenes could have had a lot of tension, but you knew that everyone was going to make it out safely.

There’s a fundamental problem with the argument that Bobbi, Mack, and everyone else claiming they work for the real SHIELD. SHIELD is an organization that was completely demolished in the wake of HYDRA’s reveal. It was an organization in tatters and had to be rebuilt. That is what two teams seem to have done separate from each other. Each building up their own version of SHIELD with their own ideals and how they thought it should be run. Neither is any less the real SHIELD. They are just different SHIELDs spawned out of the same ashes. However, while Coulson’s SHIELD was out trying to solve problems, the “Real” SHIELD was simply investigating Coulson and huffing about his methods. And in doing so, they were keeping the very secrets that they didn’t like Coulson keeping. It was false transparency and it was ultimately irritating.

I was glad that Skye finally got a chance to be Gordon. He is the one person who can really help and teach her about herself. However, he can be a bit of a bad influence in the sense that he’s highlighting how Skye has been treated like other rather than being embraced. He’s an arm for her to vent and not trying to figure her out, but letting her be. through his lens what Skye can do is magnificent. Where was Jemma wants to oppress her ability, Gordon wants her to learn to be herself. Which is why it made sense that when she was being hunted down she called out for help from the one person who would make her feel at home, Gordon.