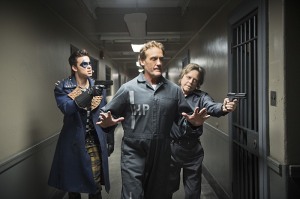 We got a Flashback of The Flash and Reverse Flash duking it out the night of Barry’s mother’s death. it was interesting finally seeing what happened that night. What was surprising however was that we didn’t see the Harrison Wells we came to know when Reverse Flash took off his mask. In fact, he was completely unrecognizable. The real Harrison Wells did exist and he was a scientist. Eobard Thawne did simply used Wells as a sort of host. What was done to the real Harrison Wells and the truth was heartbreaking.

This episode also took us to meet the Trickster as well as the new man claiming to be the Trickster. Mark Hamill shined as the Trickster. Although I couldn’t help but hear the Joker as he sat in the shadows. it was a bit disorienting. It didn’t even take knowing that Mark Hamill was the voice of The Joker for ages. There was something about the way he talked and laughed. It felt very reminiscent to his Joker persona, rather than being uniquely Trickster.

I really enjoyed this Trickster storyline. As they had to work with the former Trickster who was locked up to stop the new kid who was gallivanting around the city bombing people. Things got worse when they learned the new Trickster stole the old Trickster’s largest bomb. When there is a bomb large enough to blow the entire city it’s a problem. It wasn’t ultimately surprising that they were working together. They were able to drum up quite some issues which will be interesting to see them work through in the future when they inevitably get out.

The show pushed yet a new boundary of Barry’s power when the Tricksters decided to strap a speed sensitive bomb to his arm. It was speed in The Flash version. Barry needed to run keep running, which required Barry to listen to wells for a change. Wells coached Barry into tapping into the SpeedForce for the first time. It was interesting to see how quickly he learned how to use it and save himself. I simply wish that we got a bit more time with the SpeedForce. It was only an introduction, but I wish there was more.

One really frustrating aspect of the show so far is that we know Wells is in fact Reverse Flash. While I’m glad that they have Bary and Joe looking into Wells more intently, you can’t ignore the fact that we know the truth. While they spin their wheels, they aren’t leaning anything that we don’t already know. I understand that they can’t just jump too quickly without it making sense. However, I would rather see them discovering new information rather than see them spin their wheels and toil over what it feels like to not have any evidence yet. It was interesting that they let Eddie in on the secret just so they could get more info and keep Iris off their tracks.

2 thoughts on “The Flash – “Tricksters” Review”