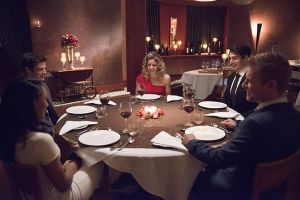 The partnership between The Flash, Joe, and Eddie is really amusing. Eddie seems to be taking this in stride and really enjoying how Barry can be an asset to them. All the animosity that seemed to be building between them has mostly faded away in favor of the embracing what The Flash can do to help them with their duties. That said, the secrecy is really grating on Eddie and his relationship with Iris. He wants to tell her, going so far as mentioning that he hasn’t had sex with Iris to her father. None of it really mattered because Iris ended up exploding on Eddie for keeping secrets. I see Iris’ side, but she’s really acting out inappropriately which makes it harder to like her. Her reaction just seemed unfair even if she did feel deeply upset. She didn’t try to talk it out, she just got angry. While I know she’ll feel like a dope when she finally gets the truth, she’s truly a walking a thin line between being a character fans can relate to and someone who is frustrating.

The case of the week involved bees that stung a woman to death. However, it wasn’t normal bees, but ones that were being controlled by who they thought was a metahuman to target the attack and amplify the toxicity of the sting. Barry got to experience firsthand how terrible the stings were as they nearly killed him. It was an interesting turn when we learned that the bees weren’t bees, but robots. I really enjoyed Emily Kinney (formerly Beth from The Walking Dead) as Brie Larvan aka the Bug-Eyed Bandit. That said, her as a villain wasn’t really fleshed out.

This week marked a crossover with Felicity returning to Central City with Ray in his ATOM suit. It was interesting seeing them appear and storm in to the city with no real discretion. THis was really the first time Felicity and Ray felt like a bonafide couple to me. You got their quirky relationship and could see why they were together. Not to mention the banter between them really worked. Felicity and now Ray, added a bit of lightness to The Flash just when it needed it. As Felicity quipped The Flash was supposed to be the fun one, leaving Arrow to be dark. However, The Flash has been steadily getting a bit darker. The infusion of Felicity and Ray was the kind of uplifting addition to lighten up what could have been a pretty dark.

Cisco and Ray working together was fantastic. These are two tech geniuses and watching them brainstorm was amusing. However, the brainstorm was cut short. Cisco got a flash of the alternate reality in which Wells killed him. That was a rough moment to watch, but the real question was how Cisco was going to interpret that flash. The memories are coming back strong and he’s clearly reaching out for help, but no doubt feels like he can’t tell what he’s experiencing. Now would be the best time to voice his concerns as it might help Barry with the anguish he’s feeling while also giving Cisco someone to talk to.

Ray also got his chance to show off his suit. Rather than just working on the suit he got in on and in action. I enjoyed the little scene.

One thought on “The Flash – “All Star Team Up” Review”