What perfect timing that Oliver walked into the loft moments after Thea was gored (and yes, I believe that’s the most appropriate term for what happened). It was just enough and just fast enough to get her to a hospital. Get her stabilized. However, it may not have been fast enough to spare Thea.

The only way for Oliver to potentially save Thea is to accept Ra’s offer. That means bringing Thea to Nanda Parbat so she can go in the Lazarus Pits. Malcolm is so distraught over what is happening, but is willing to accept it. He believes the Lazarus Pits will change Thea and it isn’t worth it. He even throws out bringing Thea to STAR Labs over making this deal with Ra’s. 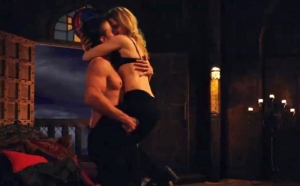 This episode also brought about the end of Ray and Felicity’s relationship. After that look of doubt Ray gave last episode after seeing Felicity and Oliver together, you knew something was brewing. That came to a head when she came to borrow his jet for her and Oliver to use. It was a nice moment. However seeing that Ray and Felicity never felt like a loving couple, but two people just enjoying time together, this was inevitable. Not to mention I think they are really playing the Olicity relationship long term. (I do like them together, but I must admit, I just want them to get together already I’m tired of the games).

The whole group came on the journey to Nanda Parbat rather than letting Oliver go alone. Honestly that was a smart move because Oliver can make some dumb impulsive decisions when left to his own devices. Diggle was given a glamorous room, but in true Diggle fashion he calld Maseo on his shit. Even after learning that Akio died in Maseo’s arms, he still nudged questioning if Akio would be proud of Maseo now.

The Lazerus Pits proved to be just as dangerous and transformative as Malcolm had feared. She sprung out of the pits like a frog and had no memory of a lot of what was going on. It was rather unfortunate that after all the forward progress with Thea she’s been reverted to this innocent shell thing. Worst of all, we don’t even know the side effects.

Oliver staying in Nanda Parbat was difficult for Felicity. She loves Oliver and always has. She was going to fight for him, but Ra’s spun his words to force her to make her peace with Oliver’s decision. After what’s been teasing and playing for quite a while, Oliver and Felicity finally had their moment. I really enjoyed that Felicity was not going to drink the kool aid. She took things into her own hands and was going to sneak Oliver out. I really enjoyed seeing this more forceful take charge attitude. While no one agreed with Oliver’s decision, Felicity was the only person who was actively going to do something about it.

I just need to note that Oliver as Al Sahim, the Arrow, looks pretty scary.