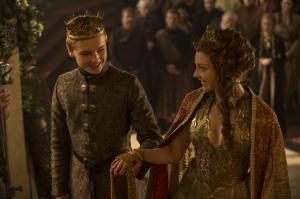 Clearly sweeping floors is not what Arya wants to be doing in her training. It seems she doesn’t know the concept of paying ones dues. Then again you have to remember she’s a lords daughter. While she’s had her own struggles more than many could imagine, she lived in away that afforded her a sort of privileged outlook on the world. However she was given her first task. She had to get rid of all of Arya Stark’s items, essentially renouncing herself. With hesitation she did it, all but needle which she hid.

It is so odd seeing Tommen with Margaery considering he’s so young. However they are now married and the time together was sweet and joyful. It was odd seeing such an upbeat conversation. It was amazing how quickly the joyous tone shifted for a much darker one. She cast the seeds in Tommen’s head and it quickly spread. Margaery has Tommen wrapped around her finger. It is so upsetting because Tommen is truly a sweet boy. The tension between Margaery and Cersei was palpable. I’m honestly shocked that Cersei kept things together so well and let no underhanded insults fly, instead letting Margaery get her potshots in (queen mother or dowager queen?). 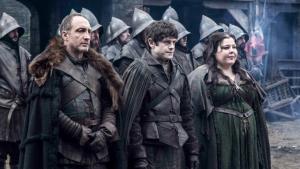 I felt just as disgusted as Sansa did at the idea of marrying a Bolton. Ramsay is disturbed and twisted. Forcing Sansa to go home to a place that is no longer home and to wed that lowly person is vile. I feel her trouble and immediately started hoping for things to go better for Sansa. Still, she takes up her new position with pride. It was interesting seeing reek avoid Sansa, both afraid and ashamed and who knows how many other emotions mixed up in there.

There was a really great character moment between Podrick and Brienne. We don’t often learn much about Brienne. We got to see Brienne soften a bit. She even offered to finally train Podrick. This was the one moment when we really learned something from her past. It was the kind of story that showed how it shaped her. How her loyalty was. It showed what motivated her.

The Sparrows are causing trouble in King’s Landing. The high scepter was found in Littlefinger’s brothel enjoying a perverse mockery of his own religion. The devout Sparrows were not to allow such corruption of their religion. The paraded the high scepter through the streets naked in the ultimate walk of shame.

Jon Snow is settling in to his position with dignity. He’s playing his cards well keeping his enemies close and sated. That doesn’t mean he’ll stand for disobedience. He is now the Lord Commander and demands respect. Jon proves to be every bit his father’s son. He carried out his execution of the unfaithful. I’m glad he did.