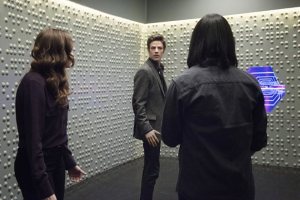 Barry got to ask a few questions to Gideon. He also got some answers and revelations that really threw a damper on the events. Iris West-Allen. He created Gideon. He’s alive in over 200 years. He is a founding member of, though they didn’t say it, the Justice League. Pretty much he learned way more than he was supposed to, but it all helps in the journey he’s having with Wells.

We also got a great moment were we saw a flash back of Barry in the hospital. Joe wouldn’t leave Barry’s side. Spent weeks there. Joe is as much a father to Barry as Barry’s actual father. Any less care is demeaning to the role that Joe had on Barry’s life and vice versa. However this moment segwayed into Joe’s first encounter with Wells when he offered a way to help Barry. It was something that haunted him to this day. He never trusted Wells even when he was the only option.

Amid all of this Eddie decided that it’s time for him to propose to Iris. Things are finally better with him and he’s all in. The problem is that Joe is not giving his blessing. It was actually hilarious that Joe just kept saying no and then just walked out. The combined with Eddie then going to Barry after he saw her name in the paper. Eddie was giddy over the idea of Iris Thawne. Barry’s sly remark about her hyphenating was hilarious and fitting. It really didn’t help that they realized that he may have some relation between himself and the Reverse Flash.

They decided to jump into Cisco’s dreams to tap into what happened in that previous time line. It really worked, but not without some of the classic Cisco humor. Him drinking milk, passing out, and so much more. When you think about it, they put Cisco through torture and he did it in stride. He was literally forced to re-live a betrayal and his own death.

They certainly didn’t make anything easier on Cisco as they used him as bait. They had Cisco lure Wells into the trap. However, it was Wells who had laid the trap. He had the Everyman play as him and died for him. In the vault we found out that Wells had been intensely spying on every last one of them. He was laying his web and deeply. There’s really no reason that we should think that he would have done anything less. Wells has been essentially been working this long con for a long time.

Wells took his opportunity to more on Iris. However before he could kill Iris, Barry arrived and wells had to speed off with just Eddie. Wells revealed that not only is Eddie his relative, but that Eddie is just a nickname for Eobard. On the Iris front, she realized that the Flash was Barry because of the spark when he touched her hand. The jig is up and I’m glad.