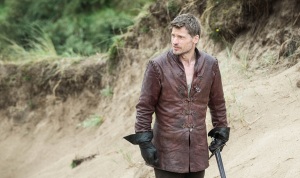 Bronn and Jamie at on their cramped trip to Dorne. There seems to be an interesting dynamic between the toa and I’m sure this will grow to be anther one f my favorite pairings. These are two strong proud men and a but Jamie is out of his element. He’s no longer the strong fighter that he once was. This is forcing Bronn to take the lead and he does it with entertaining swagger. I really enjoyed getting to see Jamie get back into fighting. It’s also rather funny seeing him ordering Bronn around smugly knowing he can’t help.

Ser Jorah was kidnapping Tyrion to take him to Danearys. A revelation that Tyrion found particularly hilarious since that’s where Vaerys was having him go anyway. In typical Tyrion fashion, he figured out what Jorah was up to and why he was being kidnapped at all.

Things in King’s Landing are getting tense already. Cersei is pulling strings, giving the High Sparrow an army.the High Sparrow went about killing or arresting anyone they deemed unsavory. That included Loras. This has forced Tommen into a difficult position as the young king has to stand strong to get Loras freed. It was almost heartbreaking seeing Tommen try his best and not get anywhere because he is a good person and didn’t wish to resort to violence. When you think about it, Cerseis actions are doing her son no favors. In fact, it may push an already tenuous King into a position of doubt and correspondingly frailty.

I’m glad we finally got a scene between Shireen and Stannis. We didn’t often get to see me together. Shireen is often shunted off to the side and left to her own devices. She’s quite a small girl, but her mother treats her like trash. It hasn’t helped that Stannis is always busy. The scene between the, was an opportunity to cement there relationship. There was no doubt that Stannis loves his daughter. The fact that we learned how Shireen got the greyscale was an added bonus.

Jon Snow is in a very tough position. He needs men, short of that he needs support from his neighbors and that means the Bolton held Winterfell. The thought of teaming with the man that kills his brother, but concedes only because of his desperation. He wasn’t however desperate enough to fall prey to the red witch. 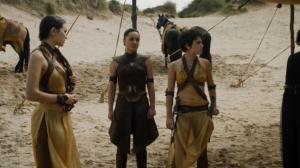 I am in love with the women of Dorne, will particularly the three who are out to avenge Oberyns death. The three are fierce. They as dangerous. I can already tell that their adventures to incite a war will be one of my favorite storylines. It was a very short scene, but I’ll love it.

What happened in Meereen was rough. It was a hard sequence to watch as the Sons of the Harpy lured Grey Worm and his team of Unsullied into a trap. Ser Barristan came to the rescue, but it wasn’t for trying. Along with Grey Worm they fought valiantly. That scene however, broke me in ways I didn’t expect. I didn’t realize I had become so attached to either character that seeing them fight what seemed a no win situation hurt.