Stannis officially burned Shireen for naught. Just after the terrible event men mutinied stealing horses and the mother of his now dead child killed herself in grief. Melisandre’s fled after giving assurances that he would come out victorious.

Quickly we saw that though he marched his men forward proudly into battle, it was a loss from the start. He was severely out numbered. Thankfully we didn’t have to see the long drawn out fight we just cut to his men dead and Stannis limping from the battlefield. What made the moment even stronger was him encountering Brienne.

Sansa finally lit the candle for Brienne, but she’d already turned away to deal with Stannis. Unfortunately Ramsey’s girlfriend caught them and was ready to maim Sansa. Theon wasn’t standing for this any long and killed her. Now they fled. It was a truly sweet moment of progress as the two fled from their abusers again hopefully as siblings, but at least as fellow escapees. 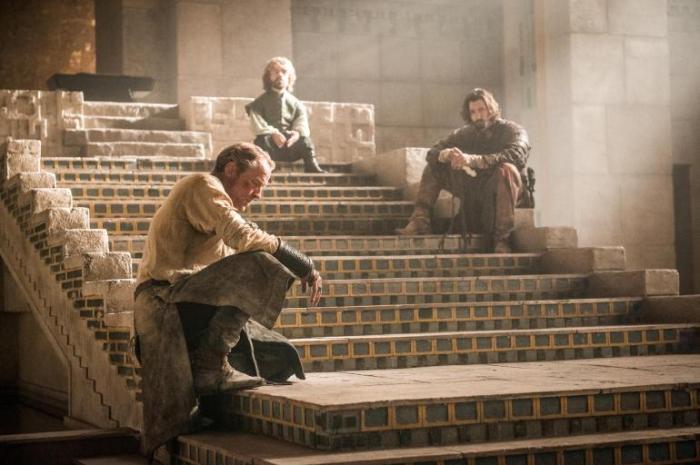 Arya killed the first on her list. When we saw him beating the girls we saw more proof of how sick he was. We didn’t have to wait long to see her kill. She slaughtered the man who killed her master. However it was a sign that she wasn’t ready to really commit to her journey with the faceless God. It was a truly bizarre scene as she was deceived and her sight was taken from her.

The Dorne storyline has always been weak. It failed to lack the punch it needed. Despite the turn of events, this is still the case. Marchella being murdered is unfortunate, especially after the touching moment with Jamie. Yes this will raise issues between Dorne and Westeros.

With Daenerys missing in action, the rest are left to figure out how to rule the city. That means a team up of Tyrion, Missandei, and Grey Worm to placate the city. Luckily for Tyrion a man who only just knows Valyrian, he has Vaerys whirring in his ear again. This will play a solid role for Tyrion if he is to coordinate a city in her stead.

That said, Daenerys is off in what seems to be Dothraki territory as Drogon relaxes and rests after the ordeal. It wasn’t much, but it was nice to at least learn about where she flew off to.

Cersei tried to make good with her imprisoners by repenting. The high Septon surprisingly accepted that she hadn’t committed incest despite his doubts. She confessed and was marched back to her home, broken, naked, and humiliated as all around taunted, yelled, and had food thrown.

Jon is in a tough place and it’s going to get tougher now that Sam wants to leave his side to protect Gilly. He’s going to become a master. Jon though is losing the one voice he trusted and one person who had his back. Compound that with the blow now received with Stannis’s death. Things keep getting worse. However, Jon did get news that his uncle was still alive only to be deceived and stabbed by his watch. Murdered in cold blood.