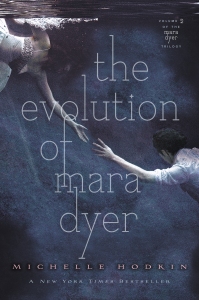 The Evolution of Mara Dyer by Michelle Hodkin

I can’t say too much in this review because this is the second book in the series and relies heavily on the twists and turns. Thus getting into any of the specifics that may not be super spoilery for this book would certainly spoil you for the first book.

A few months ago I read the Unbecoming of Mara Dyer. I didn’t love it, but I liked it enough that I decided I would continue on with the series. I was hesitant about getting invested in this series because it seems a number of people were not pleased with how it ended. Even still, I picked up the second book: The Evolution of Mara Dyer.

I’m glad I did. I breezed through the book reading it in less than a day. I honestly didn’t want to put it down because I constantly wanted to know what was going to happen next, how things were going to get weirder. It didn’t hurt that I really enjoyed the characters. I couldn’t really connect or relate to the characters, but they were fascinating to read as they moved through the world.

The intensity in this novel just kicked it up a notch from the last book and I ended up enjoying it more than the first. I found myself tense as I was reading. Skimming and reading faster than probably ever before because I had to know.

I will note that the plot didn’t seem as tight as the first book. For all the string of events that happened in the first book, less seemed to happen in the second. That said, the things that did happen were intriguing. Watching as Mara was tormented and driven mad it was heartbreaking to see her slowly losing it when she wanted to fight so bad. For each event that occurred it felt like we then took a quite a bit of time to decompress and analyse. This time made you wonder if Mara really was as sane as she thought she was. It was well done, but made things move much slower than previously.

That said, I really enjoyed the book. I breezed through it and I was glad. The ending really kicked it up a notch raising the intensity even further. The number of “WTF”s that fell from my mouth were innumerable (not really, but I don’t remember and I know it happened a lot). There was a lot of new information revealed about what was happening to her and that felt satisfying after being dragged through so much uncertainty.

4 thoughts on “The Evolution of Mara Dyer by Michelle Hodkin”