Now that SDCC 2015 has finally wrapped up, I can finally take a step back and say that this seemed like a highly exciting event to attend. If only I could have been one of them. Thankfully, San Diego Comic Con has gained enough acclaim that like many major events much of what goes down is broadcast to the public or at the very least heavily reported on. I may not have been able to attend, but I certainly got to experience the cluster of things going on. Considering that I was in the comfort of my home able to simply click over to another event within a moment and I still missed events. I can’t imagine being on the floor and being even more limited. Though getting to see one’s favorite artists, actors, and things that make your heart sing live and in person is something that can be belittled.

We won’t get into the fact that I have the biggest crush on Zachary Levi because he is both adorable, caring, sweet, hilarious, and easy on the eyes. That is a given with me. Let’s get to the point that for the past few years Zach has plowed forward with Nerd Machine and all that goes with it. Not only is it a haven for like minded people to geek out about some of the things they love, it’s also an organization with a heart. Each year Zach has been putting on Nerd HQ adjacent to SDCC serving as an additional outlet to those who want to get in on the nerdy goodness. The panels that are put on are absolutely great and from the look of it appear far more intimate than those that go on in the massive convention center. Not only that, but these are high quality panels that are truly fun to watch and love. I didn’t get to watch all of the panels yet due to personal travels. I did get to see The Marvel Agents Panel, Supernatural, and Heroes Reborn panels. Each one was fantastic and I can’t wait to watch the rest. Did I mention that behind Nerd HQ was a great fundraising effort that is beyond commendable. I may head out to San Diego next year just to attend the panels.

It wouldn’t be comic con if there wasn’t an outpour of new trailers for shows and movies that we love. This year there was no shortage of them. The two that particularly stuck with me the most was the drop of the Batman v Superman trailer and the Deadpool trailer. Technically only the Batman v Superman trailer is the only one officially released to the public so I will embed that trailer below. I am heavily weary of this movie. Let me explain. The whole reason I started this blog was because I didn’t particularly like Man of Steel. So the fact that I’m even here is because of that movie. Batman v Superman has not done anything to assuage my fears though it seems to have moved away from some of the things I didn’t like in Man of Steel only to replace those dislikes with other things that make me cautious. Understand, I want to like this movie. I’m just afraid I’m going to feel generally meh about it. I don’t want that to happen. The trailer that just released was the first indication that I may indeed like it. At least there were elements.

The Deadpool trailer, I wasn’t supposed to see, but I did and I was glad. I was already excited about Deadpool and it’s R-Rating. The idea of having both Ryan Reynolds and TJ Miller is thrilling to me. I’ve been a massive fan on Ryan Reynolds for over a decade and this is largely because I always saw him as something with a solid eye catching presence who was also unfairly hilarious. It seems many people seem to forget that Ryan Reynolds is a very funny guy and knows how to deliver comedy with the best comedians. When you add in TJ Miller this movie is screaming to be funny. The few moments I saw in the trailer were rather humorous even when they were out of context. I’m really looking for the full trailer release and the movie to come out in February.

There were a number of other trailers that were either released on the show floor or at the same time. I won’t go into them all, but there were quite a few. 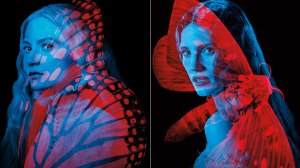 For a moment I was going to title this section Updates on Well Loved Properties when I realized that wasn’t entirely true as there were certainly new shows that were thrown into the mix. SDCC is a place where shows and movies can give a lot of updates on the progress of their properties. It’s a chance to show off and taunt what new things will be coming. It’s a place to drum up excitement and this year did not let down on that front. Both Arrow and The Flash revealed new villains and characters who will make their appearance in the new seasons. A brilliant dubsmash war emerged between Agent Carter and Agents of SHIELD (seriously, if you haven’t checked it out, you should), while we learned a bit more about where each show is headed (Howard Stark building a movie studio and Secret Warriors).

Crimson Peak is still playing things eerie. Pride and Prejudice and Zombies is played completely straight which helps you invest in the characters, also Guillermo Del Toro is still fascinating. There are pictures officially released of Princess Leia in the Force Awakens. There will be a Green Lantern Corps movie, meaning I will finally get to see John Stewart brought to life (Fun fact: While, I knew there were many Green Lanterns, I thought John Stewart was the only Earth based Green Lantern until I was like 17. All the Green Lantern media I grew up with only featured John Stewart.).There was so much more depending on what you are most jazzed about.

Obviously I wasn’t there to be a definitive judge, however I’ve read a large chunk of the coverage. Everything I got from this year’s event has been overwhelmingly positive. Sure, there was no MCU at the event, but that allowed so many other great things to shine and I really appreciated that. It was a great comic con and I wish I could have attended. There’s always next year.