Of all the movies announced for the DC slate, I was most excited about Suicide Squad. I’ll be honest, I didn’t know about the Suicide Squad until maybe five years ago. However, once I learned of the concept it was brilliant. The idea is bring together all the nasty villains who are currently locked up and use them to accomplish highly deadly and potentially politically damning ventures. Should anything at all go wrong, ARGUS can simply blame the villains. Should any of the villains die in the process of the mission, then the world is rid of another villain. Sounds kind of grim, so why would these villains agree to do these missions and not just go off the rails once they are out of lock up. Well, every villain has different reasons. Some who are not as bad as others may just be clamoring at the idea of successfully completing enough of these highly classified missions could buy them their freedom. While others just want to get outside of the cells. And some are just in it for the pure excitement. One of the most brilliant things about the Suicide Squad is that these are extremely varied villains and they all have their own motives and personalities being forced to work together.

Just the idea of seeing the Suicide Squad on the big screen was enough to thrill me. I was through the roof just seeing them on Arrow. Pulling the Suicide Squad to the big screen is possibly the biggest risk DC is taking as it is a much darker tone. It will no doubt turn some people away from the name alone. And the trailer, well, the trailer doesn’t paint this as the kind of film that has any light and fluffy moments, but I’ll talk about that in a bit. What Suicide Squad presents is the opportunity to explore a different kind of character and their complexities. There is something about being able to dive into the mind of a villain to see what makes them tick and what drives them. Add in the fact that this is going to be a team movie it stands the chance of drawing more people in for various characters.

Now I’ve been skirting this enough, but let’s talk a bit about the trailer. If you haven’t seen it yet, take a look and join me below to dig into what this trailer is presenting this movie to be.

First off, there is absolutely no denying that this movie is dark. I mentioned it previously, but it seems to be reveling in the fact that it has this wide array of both deeply disturbed and very troubled characters to explore. Pretty much the entire trailer is swathed in a dark palette. Now, usually this would put me off a bit. I’ve grown tired of everything being dark. Not only does it become less interesting over time, but it also becomes a bit grating to watch. I’m personally not a fan of having to turn my brightness up just so I can see what is going on. Yet it works here in Suicide Squad. This I believe is largely a credit to the characters who while we aren’t given much on who they are, they are costumed brilliantly so that they catch your eye. 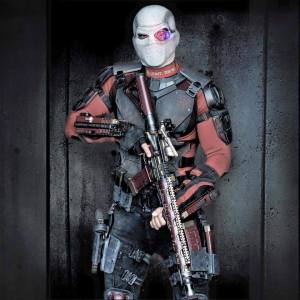 I’d be crazy if I didn’t take a moment to talk about Viola Davis as Amanda Waller. She seems to be enjoying her role as the morally corrupt person giving all the commands. The opening dialogue as she’s sitting down to a pleasant discussing this new team of her almost as though she is bored. The fact that she’s assembled a team of “the worst of the worst” doesn’t seem to bother her because manipulating people is what she does best. It is conceited it is privileged and it is such an interesting depiction of Waller that I’m excited to see that play out.

Throughout the trailer we are fed glimpses of Harley Quinn. Will Smith’s Deadshot will no doubt be the rivaling leader beside Joel Kinnaman’s Rick Flagg, but it is Margot Robbie’s Harley that is already stealing the show. It is obvious why. In the many depictions of Harley, she’s deranged, over the top, but undoubtedly the most enigmatic person in the room. When Harley walks in you can’t take your eyes off her simply because you never know what she will do or say next. It is that element of chaos that is thrilling with Harley. Aside from the eye catching moment as Harley hangs from the top of her maximum security cell from her bedsheet, we don’t see character establishment of Harley other than her array of outfits and her signature bat. She is so frequently popping up because her character is iconic enough that one doesn’t need much more explanation. Her presence is the draw for better or worse.

We get a strong look at the team in this. There are so many of them that we don’t get much more than quick glimpses, but it’s enough to see the spread. I was actually pretty impressed with Killer Croc’s look as the early photo release made him just look like a discolored giant. The trailer however made his moments really feel reptilian and it will be fun to see him on screen. I was initially shocked to learn that Katana would be in this film. I’m a fan of Katana, but any fan would know that she is the one character that doesn’t fit in with the rest as she is not a villain or even really morally ambiguous. She’s a good guy, so I’m interested in seeing that got her in that cell we glimpsed her in. Whatever did happen has left her extremely remorseful as it seems she may be inflicting self harm or at least taking it out on herself. It will be interesting to see what her story is and how she ended up on this team of villains. Either way it looks like a very interesting team up with the group of characters here. My only question is if it is a few too many for each character to feel worthwhile in the major story.

Finally, I have to take a moment to talk about Joker who made his first appearance. We’d seen the pictures of him emerge. I fell into the camp of not really minding the look of The Joker. He looks deranged and that’s what I want of my Joker. Either way his appearance in the trailer left me with many mixed feelings unfortunately falling toward the negative. For one if the brief glimpse of a laugh that we got in the trailer is supposed to be the Joker then I’m disappointed. It sounds slow and calculated rather than manic and chaotic like I hope from the Joker. One thing that Jared Leto’s Joker has down to an amazing degree is the menace. This Joker makes me want to run away crying. He is a scary guy that you fully believe will hurt you. Not only will he hurt you, but he will enjoy himself doing it. It’s great to see on screen. The only problem is again that he seems to lack the manic nature that makes him the Joker. I can imagine this Joker grinning as he mutilates you, but I can’t seem him reveling in taunting you about when exactly he was going to start. That will he or won’t he is missing that makes him such an unknown factor.

Overall, I really enjoyed this trailer as it set a mood that has drawn me in. It’s dark. It’s not happy. It’s not about heroes and that’s something I’m really looking forward to see play out. It will be a breath of fresh air from the standard superhero fare that we’ve become accustomed to.

Did you enjoy the trailer? What did you think of it?