Justine does not play. After the events of last wee she’s moving to expand further in the city. She plays it smart knowing that her people need supplies and is willing to offer the Upper East City as the next place to be cleared, but only if the citizens will give up 1% of property value. Clearly this isn’t something tht these elite people are willing to do.

I’m glad that the tea was finally making a move on Eldritch Instead of just letting Eldritch go on they finally tried to take him out. Honestly, I’m still not sure of his role in all of this. He is clearly a major player. The attempt was a complete failure. I wasn’t surprised about that. If there was anyone who couldn’t pull this off it was Eph. It was truly a job for Vasiliy out of anyone. Seeing them arrested by the police did prove to be a nice hurtle. Unfortunately it didn’t live up to what I hoped. A confrontation between Eph and Eldritch was heated but lame. It did reveal that Eldritch is so delusioned about his relationship with the Master that it’s almost pathetic. 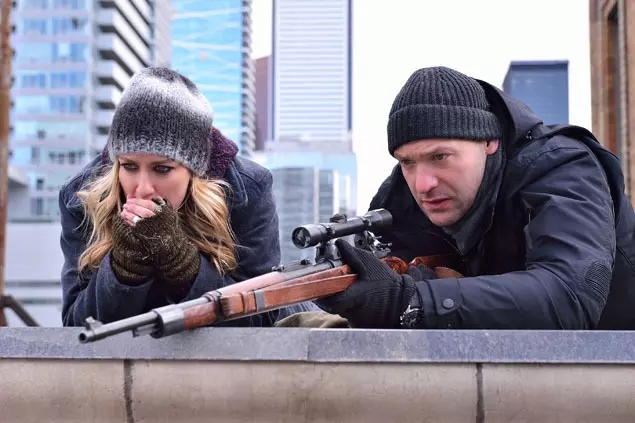 The begging and groveling from Eldritch to Coco felt so ridiculous. I don’t know if I’ve mentioned this (note the sarcasm), but I really don’t get, believe, or buy their relationship. Not even in the slightest so any time wasted on it just feels positively unnecessary and a waste. Thus when she regretted coming back to his side only to be seriously injured nearly dead I felt it was a waste. Maybe I’m just wishing that characters have their own autonomy rather than just being players in a bigger story. Coco was never a character who got to do tings because that’s what she wanted. She even the actions she took weren’t clearly for her own purpose, but to serve as a movement for Eldritch’s development. As a result seeing her shot after the assassination attempt felt like a relief. (I’m still stuck on the fact that she survived a bullet to the chest long enough to get surgery.)

The police station scene was probably the most engrossing out of the entire episode. Not just because Eph was trapped in a cell as a bunch of vampires descended upon the precinct. It was because you new something was going to happen, but things just kept getting worse. it wasn’t until Vasiliy and Nora emerged that you finally felt the tension release.

All the while Setrakian is still on his search for the Occido Lumen and he finally found it. it’s about time he stumbled across it after a season. Now he should have the ammunition he’s been seeking. That is if it wasn’t stolen from his fingers. It’s one of those damn moments.

Then there’s Dutch who’s arrest resulted in her being in the possession of Eichorst. It does not look good for her.