Before we get into this review I just wanted to note that as of now, I will not be reviewing Gotham beyond this episode unless the numbers support it. Sorry, if this isn’t what you want, but leave a comment below telling me so. Also don’t forget to tweet about it. If the numbers go up from last year, I’ll continue to review.

Gotham seems to be embracing everything ludicrous about it’s situation. Things are chaotic with people masquerading on the streets as villains. Pretty much, Gotham is still an awful city.

I was glad that we jumped right back to where we were at the end of the last episode. In that I mean that we see that Bruce got into the cell but couldn’t get in. Fast forward a month, Harvey is working at a bar, Gordon is a beat cop, Barbara is being brought in to prison, and Nigma is losing his mind. That however has nothing to do with the fact that Gordon is still being jerked around because of nasty Gotham politics. Relieved of duty within the first 10 minutes clearly Gotham will be taking a much different path this season.

Last season we saw an evolution of Cobblepot and Gordon’s relationship. Cobblepot truly sees it as a proper friendship, but Gordon does not. That doesn’t change the fact that when he needs something he’s willing to go to Cobblepot. Their dynamic is something I hope that continues to be explored. At the same time, Gordon is so against pretty much Cobblepot is about it makes it difficult for this relationship to grow.. I have to hope that something gives.

I found it almost fitting that it was Bruce who gave Gordon a talking to about his morals. It was a swift kick in the pants for Gordon. Bruce may be young, but he recognized that if Cobblepot could get what Gordon wanted, he needed to do it. It seemed that it was the talk that pushed him over the line. He went to do Cobblepot’s bidding and killed a man in the process. It will be this change in character that 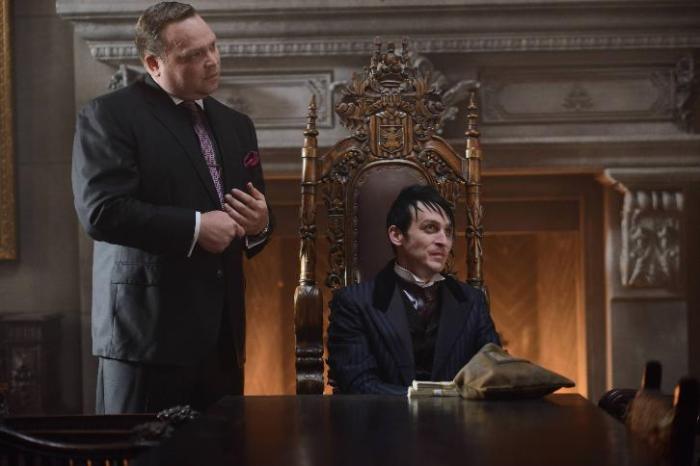 It’s not surprising that we saw villains together. I found it rather strange that the people in Arkham Asylum were allowed to cavort around together. I will say that I fully enjoy seeing that Barbara has a lot more edge. Already, I am finding her more interesting, especially as she interacts with other villains we saw last season like Jerome and Sionis. When they were finally broken out into the care of the new commissioner, it took an interesting twist. Clearly he’s gathering a team of villains. The real question is what for. Theo Galvan is an enigmatic villain leader. The problem is we need to see some sort of end goal for this villain group.

While I’m not yet convinced that this season will improve upon the last season, I am enjoying that we are officially moving from the case of the week set up. It was holding the show back from presenting a complete narrative. Unfortunately, I don’t understand exactly where that narrative is heading as this episode didn’t really establish that well.

I’m glad that Bruce was able to get all the way into his father’s hidden room. The note from his father is something I felt he needed. The problem is that even if Bruce gives in to this calling, it’s possibly too early for him to get on his path to Batman.

Credit goes Zsasz for the most disturbing moment in the entire episode for the head he bandied about as if it was nothing.