Limitless jumps forward in time. Everything you know from the movie applies. Don’t be fooled Bradley Cooper’s Eddie is still in play. Eddie in fact is briefly seen on a campaign poster. Brian is given the drug on the sly and goes on the fly.

Just like the movie, it was a lot of fun seeing how Brian figures things out. The result was a lot of really fast sequences that managed to ramp up the tension. That speed and unwillingness to slow down right now feels like a benefit to the show. 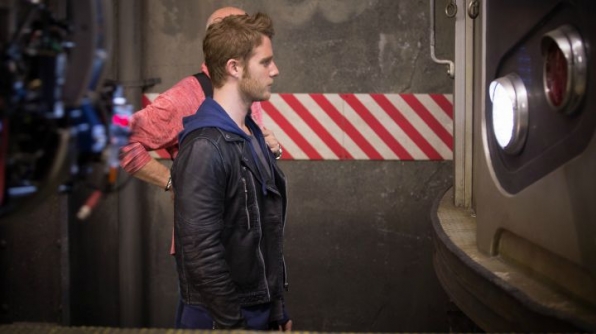 I was actually rather impressed that there was such a heavy focus on the characters and establishing Brian and his family as real people rather than caricatures. It is sad, but I feel like I know Brian better than I know some characters that have an entire season under their belt. Obviously there is a long way to go, but the development in this episode felt promising. It’s clear that while there may be a goal that needs to be solved, the characters are going to be the driving force rather than the case. Which is a good thing considering NZT ends up stripping Brian of much of his personality in favor of the brilliant thought process. In some ways I’m hoping that as the season moves forward we get to see more of his personality drifting in even as he uses. Ultimately what this show has going for it is a main character who it’s easy to like.

I’m also really glad that they held out until the end of the episode to bring in Bradley Cooper. It allowed us the chance to get to know Brian and care for him. By the time Eddie steps into the picture, I already felt for Brian and wanted to see him safe. Thus when a person walked in on him as he was passing out from blood loss, I was worried about Brian and not thinking about whether Eddie would appear anymore. Instead, I was fearing for Brian’s life and that’s a good sign that I would care so quickly. Thus when Eddie showed up offering something completely different to Brian was a compelling proposition that makes the premise of the show much better. Most importantly, Eddie recruited Brian as an inside man. What Eddie will want him for will be interesting to see. We know Cooper isn’t going to be a regular presence, but he will recur. I wouldn’t be surprised if we saw messages delivered to Eddie, but no direct contact.

Personally, I wasn’t a big fan of the voice over. In some moments it was definitely useful, however more often than not it was troublesome. It was just too much plain and simple. The moments when we just got to see things happen were much better. The voiceover felt like a way to baby us when the audience could have been trusted. Most of the time, the action depicted on screen ended up making sense without being fed what was going on. That’s not to say at some points it wasn’t useful.