The episode picks up where we left off, however both Missy and Clara were alive. Quickly there were threats from Missy who had Clara strung up like her next meal. Quickly we saw that they were never dead they were simply teleported. This involved tiring back to an old case in an interesting way. What it set up on the other hand was getting in The Doctors mindset and assume they were going to when just when the Doctor assumed he would die. It’s an interesting switch in dynamic but also led to a proper Clara and Missy team up to save the Doctor.

There is some serious animosity between the two women. Other than the threats, Missy decided to knock Clara down a whole to find out how deep it was. Much to Clara’s credit she didn’t just brush it off and move on, but made clear that she’d be willing to strike out at Missy. Missy is constantly a using Clara using her as bait and treating her truly like a disposable pet. That said, she’s given a chance to be more than just a villain, but how inventive and why she’s been able to go toe to toe with the Doctor. 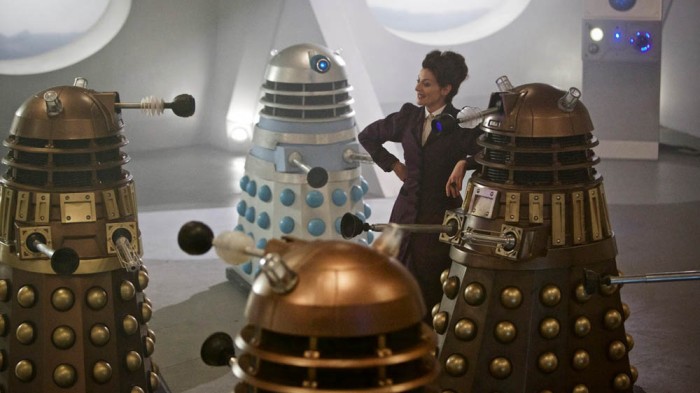 Not to mention her schizophrenic behavior is a joy to watch. You really don’t know what you are going to gee from her next. Whether that is Missy being somewhat friendly or dangerous to her Scottish brogue of a false Deep South affectation.

The messy bit came when Missy hijacked the dalek and put Clara inside. There was some interesting revelations seeing Clara react as normal, but the dalek chair made her react differently. This said a lot about daleks. Essentially any heightened emotion resulted in the suit saying exterminate and firing. Whether that was actually exclaiming exterminate, acknowledging that someone was different than them, or proclaiming love. All had the same result.

The Doctor meanwhile is dealing with the daleks surrounding him. In a move that is equally humorous kicks Davros out of his chair, leaving him on the floor as he scoots away. The Doctor is in there making threats because he’s hit rock bottom. As far as he knows Clara is dead and most certainly not safe which means he’s acting like a cornered snake. 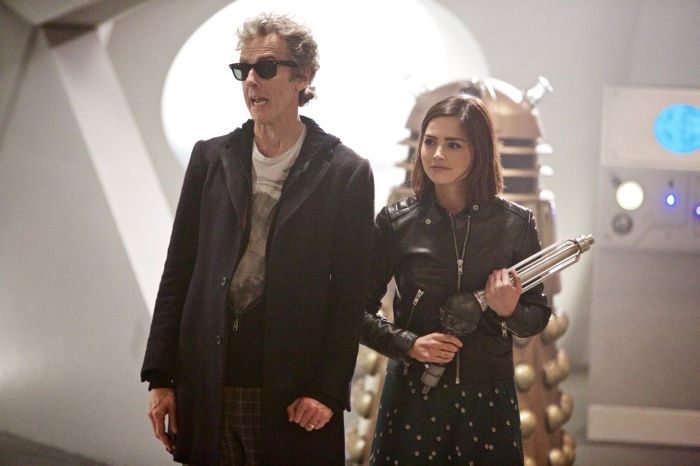 Things got particularly interesting when Davros and The Doctor really started talking. Davros explained the one fault in the daleks. While the Doctor explained why he came. In both cases the reason was compassion. That’s what they shared in Davros’s final moments. They were able to talk to each other as people and not with pure hatred. I have to give them credit in that moment it felt sad. Don’t get me wrong Davros is terrible, but in that moment I did not feel hatred. I felt, compassion for someone who was dying and wanted to commend and congratulate a long time opponent. That gesture in itself was honorable.

The confrontation between dalek Clara and the Doctor worked really well. I really enjoyed seeing the end of the episode play out as Missy tried to turn him on her. Unfortunately Mercy saved Clara. The real turn was when the Doctor reamed on Missy which made her turn to the daleks as a potential ally. What she’s going to do will be interesting.

It was great to see what actually happened when the Doctor jumped back in time to Davros in the handmine field.

I’ve got to say the sonic sunglasses are not working for them. Thankfully, they likely won’t last long. Whose sunglasses do? That said, it just felt weird with the Doctor having a completely different sonic device.