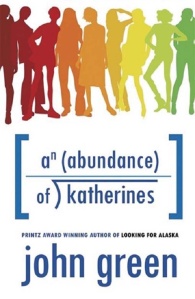 An Abundance of Katherines by John Green
My rating: 4 of 5 stars

This was the first John Green novel I’ve ever read. The fates were aligning and kept telling me I should read this one. I’m glad they did because I absolutely fell in love with this book.

There was just something about Colin that had me from the start. Colin isn’t a genius. Colin is or was a prodigy. And Colin knows that those are two very different things. It’s something that he’s struggling with. Now that Katherine the 19th has officially ended it with him.

His way of dealing with it was going on a road trip with his best friend Hassan. A rather short trip considering that they’re only on the road a couple days before they make a stop at the final resting place of Franz Ferdinand. It also happens to be a tiny town in Tennessee.

Colin is quirky and so relatable. I’m not a prodigy or a genius. I am out to not be a failure though. I fancy myself smart. And I love problem solving. The fact that we are following Colin as life is happening and helping him figure out his equation was a lot of fun. We got to see Colin grow during the time we spent with him.

Hassan was a hilarious buddy. However, he wasn’t just a funny sidekick. For as developed as Colin was, so was Hassan. We really got to see Hassan tick and it was interesting. I’m also glad that he called Colin on his shit. I feel like we don’t get as many real feeling characters like we do with Hassan.

The slow reveal of Colin’s past relationships was interesting. It felt like someone remembering. That made the reveal of all this information feel like how someone would convey things after the fact. Memories fade and you imagine things as happening one way, even if that may not have been the truth.

I will admit there is a minor baby twist that while I wasn’t sure was going to happen, it also didn’t surprise. They way the novel was structured, you kind of got the idea about the reveal, especially as you went on. Regardless that reveal wasn’t a major point, but it did serve as a reasoning to the actions and Colin’s personal growth. If that twist hadn’t occurred, I’m not fully sure he would have reached the point he did and needed to be at.

So yeah, I loved this one. I know I’ll be going back to read this one.